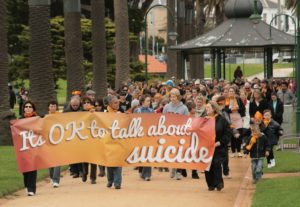 Yesterday (June 9), Professor Patrick McGorry from Orygen, the world-leading youth mental health program, ensured that mental health is given the focus it deserves during the federal election campaign with a powerful address to the National Press Club.

Professor McGorry called for government spending on mental health to increase from 7 per cent to 13 per cent of the country’s $150 billion health budget, and said that “if we improve mental health care by 10 per cent, we will save billions”.

Professor McGorry is also a Board member of the Australians for Mental Health campaign, a key objective of which is to lobby the country’s next government to commit to halve Australia’s suicide toll by 2020.

Jesuit Social Services is pleased to see such important issues on the national agenda.

Our Support After Suicide program has worked with people bereaved by the suicide of a loved one for more than 10 years. The program delivers individual and group counselling as well as other services including home visits, children’s and men’s specific activities and online resources. Since October 2014, Support After Suicide has been the select service for Victoria Police when referring family members and loved ones after a suicide (more than 630 referrals were made to the program from Victoria Police in 2015).

Crucially, it serves as both a bereavement support service and a postvention program. Research shows us that people bereaved by the suicide of a loved one are more likely to take their own lives. Providing specialist support to people not only helps them to navigate the complex grief and trauma associated with a suicide, but also works to prevent further suicides.

Currently, like many other services across the country, Support After Suicide is impacted by recent Federal changes to mental health funding. Programs including ours have previously received Commonwealth funding through the National Suicide Prevention Strategy but after June 30, 2016, funding will be devolved to 31 Primary Health Networks (PHN) across the country. This change to funding follows the publication of the Commonwealth’s National Review of Mental Health Programmes and Services paper in November 2015.

While ultimately these changes may prove shrewd, the transition to the new funding arrangement has created uncertainty, confusion and instability as services are forced to tender each PHN individually for a maximum of 12 months further funding.

After many months work, we have managed to secure some funding to continue the important work of Support After Suicide but remain concerned the funding will not be enough to maintain an appropriate level of service and that a short-term 12-month funding commitment will leave programs like ours in limbo for another year.

Professor McGorry’s address has put the national spotlight on the way mental health is funded in Australia and how we can address the country’s suicide rates, which rose by almost 20 per cent between 2004 and 2014. Truly achieving this will only occur with long-term commitment and long-term funding solutions.