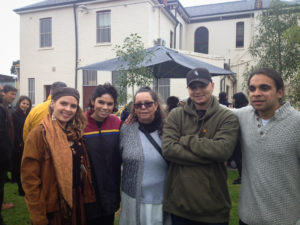 Jesuit Social Services’ PAULIE STEWART writes that our National Sorry Day event provided an opportunity to remember the impact of past policies on Aboriginal and Torres Strait Islander peoples, as well as celebrating the talents of a new generation.

Young Indigenous participants from the Artful Dodgers Studios were a highlight of a recent event held by Jesuit Social Services to mark National Sorry Day.

Since its inception in 1998, National Sorry Day has been held annually across Australia on 26 May to remember and commemorate the mistreatment of the country’s Indigenous peoples.

This year’s event was organised under the guiding hand of long time and much loved Jesuit Social Services staff member and Gunditjmara woman, Rosemary Lovett at the new Indigenous art space The Blak Dot Gallery, located behind the Brosnan Centre in Brunswick.

The event was hosted by Aretha Stewart-Brown, who is Australia’s first female Prime Minister of the National Indigenous Youth Parliament and member of the Gumbaynggir clan.

Beginning with an acknowledgement of elders past and present, Aretha said “Sorry Day is very important to me as it reminds me of the struggles faced by my Grandmother Aunty Janice Brown who was a member of the stolen generation. She was taken from her Mum when she was just 14 and sent to Sydney to act as ‘domestic help’ in the home of a North Shore dentist.

I am so grateful to get the educational opportunities she never had. This year’s NAIDOC theme is “Because Of Her I Can” which really rings true in my case”.

“I was denied access to my culture because of the stolen generation and a lot of Indigenous people still suffer because of this,” he said.

The crowd was entertained by Indigenous singer and guitarist Elijah, who performed three original songs. Spoken word artist Johnathan Binge, otherwise known to fans as CAUTION, followed with a number of original compositions including the very moving piece “Mum.”

Aretha Stewart-Brown is daughter of staff member Paulie Stewart who, along with Danielle Sherry, runs the Jesuit Social Services’ Just Voices Speakers Program based at the Artful Dodgers Studios.