Jesuit Social Services - National Sorry Day: "The Apology is not an event. It is a way of life."

National Sorry Day: “The Apology is not an event. It is a way of life.” 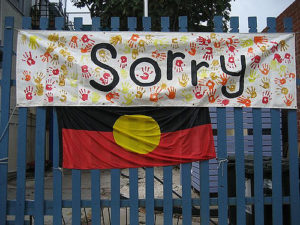 It seems an age since the Australian Parliament apologised to Aboriginal and Torres Strait Islander children taken away from their parents. At the time it seemed a brand new day; even now, children continue to catch the freshness of what was done and are inspired by it. But the condition of Aboriginal and Torres Strait Islanders has improved little over the years since the Apology; the large words invested in initiatives like the Intervention now seem threadbare; some voices are even heard commending the policy of removing children from their parents.

All this suggests that Aboriginal Australians are  seen as a problem to be talked about and solved, not primarily as people who are to be met, listened to and trusted. That is why the Apology remains a beacon and continues to surprise.

Apologies are something that you make to someone, looking them in the eye.  They are awkward because it is impossible to regard someone at whom you are looking as a problem, whether as a threat to your wealth or as a burr on your conscience. The Apology was made in the presence of many Indigenous people, and it contained moving stories of individual people. It was made to real people and brought other real people into our imagination.

That is why it continues to speak to Australians today. It commits us in our personal and public relationships with Aboriginal and Torres Strait Islander people to look them in the eye and listen to them, to ask them what they need, what they see as the problems they face. It also commits us to work with and through them to ensure that in our common Australia, in which their ancestors were the first people and formed our first cultures, they are not left vulnerable and disadvantaged.

Such conversations move beyond apology to cooperation, which must also embody the same refusal to see Aboriginal Australians as a problem, and the same vision of them as our brothers and sisters who face problems.

We hope that the spirit of the Apology will also be the spirit of Jesuit Social Services. We inherit the Christian tradition in which each human being is precious and a person to be listened to in conversation, not to be talked about as a problem. In our work with Aboriginal and Torres Strait Islander people we try to accompany them and to enable them to build connections with society in which they are equal and active partners.

As with the Apology, this determination cannot be simply a matter of words that are once spoken and then archived. The Apology is not an event. It is a way of life.