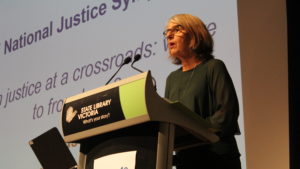 On 21 March 2017, Jesuit Social Services hosted a National Justice Symposium at the State Library of Victoria.

The event was an opportunity for experts, academics and policymakers to gather to discuss the many and complex issues affecting youth justice around the country.

Vincent previously served as Director of Juvenile Corrections in Washington DC. During his keynote address, he spoke about his work in reforming Washington’s youth justice system, including replacing the existing 200-bed youth detention facility with a 60-bed facility that was often underutilized.

Vincent spoke about the importance of reconnecting vulnerable young people with education, recreational activities and community and the role this played in reducing re-offending.

Youth Justice at a Crossroads: hear the conversations

The day featured four panel sessions including an exploration of best practice and innovation in Australian youth justice, and the role of politics, media and public opinion in shaping policy outcomes.

These sessions featured an impressive list of panelists from across Australia. If you missed any of the sessions, you can listen back through our Youth Justice at a Crossroads playlist.

We thank all those who attended the symposium, and hope that yesterday’s insightful discussions, and ongoing engagement, lead the way for effective policies that support vulnerable young people and create safer communities.

We would also like to thank the following panelists, moderators and speakers for their time and expertise: