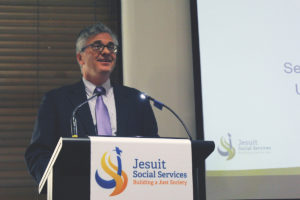 Vincent Schiraldi was keynote speaker at our National Justice Symposium

The Symposium provided opportunities to discuss the emerging adult – 18 to 24 year old – cohort in the criminal justice system.

The recidivism rates of this age group, meaning people who return to prison within two years of exiting, are significantly higher than for other age groups. In Victoria, 52.7 per cent of prisoners under the age of 25 return within two years, which is 10 per cent higher than the rate for the general population.

Leigh Marsh from New Zealand’s High Impact Innovation Programme gave an overview of how that initiative has improved operational efficiency to reduce the strain on the prison system and support people in the community.

A range of high calibre panellists also discussed topics including the vital role that civil society institutions can play in making a fair and just society, and approaches to reduce violence and other harmful behaviours prevalent among boys and men.

Resources including presentations can be found at www.jss.org.au/justice-symposium