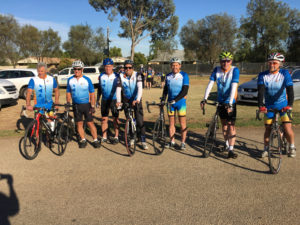 Cyclists representing Support After Suicide in the Murray to Moyne

In early April, staff and friends of Jesuit Social Services took part in the Murray to Moyne, an annual cycling fundraiser that covers over 500 kilometres from Swan Hill to Port Fairy.

Twenty-four riders, including staff members and program participants, took part in the event and fundraised more than $43,000 for our Support After Suicide program which provides services for children, young people and adults bereaved by suicide.

“It will allow us to continue to provide school holiday programs, camps and activity days for young people to enable them to understand and navigate the grief associated with a suicide,” he says.

“Everybody involved with Support After Suicide thanks the riders and donors for this great outcome.”