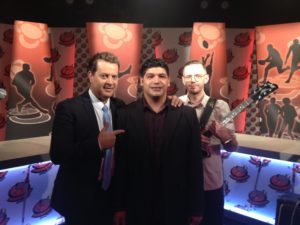 This year has seen the unique relationship between Jesuit Social Services and NITV’s top-rating Marngrook Footy Show continue to grow.

The Logie-nominated panel show recently celebrated its 250th episode, and its name comes from the local Indigenous Gundtijmara language where ‘marngrook’ translates to ‘game ball’.

Many experts now consider Marngrook was the forerunner to Australian Rules Football.

In a huge honour this year’s special AFL indigenous round was named in honour of Sir Doug who played for Fitzroy and who was the first Aboriginal player to represent Victoria.

Aunty Pam appeared on the show with the head of the AFL Gillon McLachlan, who paid tribute to the game’s Aboriginal players past and present.

Marngrook provided four tickets and a meet and greet with stars of the show as a prize at a recent Artful Dodgers Studios fundraiser organised by the Gertrude Players.

Rob Danby said his daughter had purchased the item for him knowing he was a big fan of the show.

“We all had a great night and were pleased to be part of the special celebration of the Indigenous Round (now the Sir Doug Nicholls round) with Aunty Pam,” he said.

Finally, Artful Dodgers Studios participant Lawrence Austin was invited to appear on the program on June 2 to perform ‘Yes I Do Believe In Love’, one of his great soul-flavoured original tunes, accompanied by Jesse Sullivan, who is a Jesuit Social Services musical mentor and teacher at the studios.

The Marngrook and Artful Dodgers relationship embodies one of the key actions of the Jesuit Social Services Reconciliation Action Plan, which will be launched on June 15.