In a guest post as part of our blog series supporting our Justice Solutions tour, Executive Director of the Justice Policy Institute MARC SCHINDLER explains why incarcerating young people in the adult criminal justice system is unsafe, unfair and doesn’t work to reduce crime. 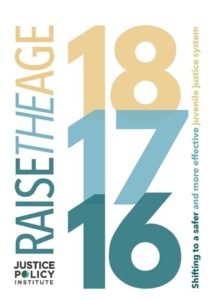 As the Justice Policy Institute celebrates its 20th anniversary this year, I reflect on a key issue we have worked on since JPI’s very beginning: fighting against the prosecution and housing of youth in the adult criminal justice system. This is a policy where we have seen significant changes over the past 20 years, thanks to the work of tireless advocates and allies with whom JPI has had the pleasure of working.

During the 1990s, in response to a spike in crime and the subsequent misguided and racist demonization of youth of color, almost every state in the country made it easier to send youth to the adult system. These policies resulted in youth being held in jails and prisons with adults, where there were at great risk of harm.

Prosecuting and housing youth in the adult criminal justice system fails the basic three-part test that all justice policies should pass: it doesn’t work to reduce crime; it’s unsafe for those impacted; and it’s unfair.

Research has clearly shown that:

1) The policy results in more crime, as youth charged and handled in adult court being more likely to re-offend, and for more serious crimes than similar youth kept in juvenile court;

2) Youth held in adult jails and prisons are at much greater risk of harm, including by suicide and being the victim of sexual assault than youth in juvenile facilities; and

3) These policies disproportionately and negatively impact youth of color, with African American and Latino youth being sent to adult court at higher rates than white youth, even when charged with similar offenses.

On this last point, there is no question in my mind that if these policies disproportionately impacted middle and upper class white youth, such an approach wouldn’t even be considered.

Thankfully, as the research became clearer while advocates and policymakers fought to create a more effective, safer, fairer, and more developmentally appropriate approach, we have seen positive change in the past decade on this issue. Since 2005, more than 30 states changed their laws to make it harder to prosecute youth as adults. In recent years, this included law changes in nine states that “Raised the Age” at which youth are charged in the juvenile justice system, instead of being automatically handled in adult criminal court.

With seven states still automatically charging 16 or 17 year olds in criminal court, JPI initiated research last year to explore what happened in the states that raised the age over the last decade. In Raising the Age: shifting to a more effective juvenile justice system, we highlighted the growing, national, bipartisan raise the age trend that cut the number of youth in the adult justice system in half.

The JPI report shows that after states absorbed 16-or-17-year-olds into their youth justice system, taxpayer costs were kept in check and juvenile crime continued to fall. This spring, lawmakers in New York and North Carolina – the last two states in the US to handle all 16-and-17-year-olds in the adult system — followed suit and changed their laws to keep the great majority of those under 18 years of age in the youth justice system, where they are much more likely to receive the services, support, and opportunities needed to get on the right path.

While it was feared that raising the age would come with a hefty price tag, juvenile corrections costs were kept in check. For example, Illinois stakeholders thought they might need new courtrooms and new attorneys to handle thousands of more youth. Instead, the system managed the change with existing dollars, a, closed three costly youth facilities, freeing up resources for community-based services

It was also feared that raising the age would increase juvenile crime, but our research showed that juvenile crime continued to fall in states that raised the age.

Less juvenile crime also meant that states that raised the age were able to reduce the number of youth confined. Since it can cost $100,000—or more—to incarcerate a young person, by shifting to practices to keep more youth at home as they raise the age, youth justice systems can reallocate resources to serve youth in a more cost-effective way. Raising the age also keeps young people safe, which saves taxpayers money in multiple ways, and gives these youth the best shot at safely transitioning to adulthood.

Lawmakers who are truly committed to improving public safety should follow the evidence and ensure that young people are in a developmentally appropriate youth justice system, where they will have the best chance to become productive adults. When considering this critical issue, lawmakers can take comfort in knowing that keeping youth in the juvenile justice system is more likely to result in making young people and communities safer, all while keeping costs in check.