Jesuit Social Services’ Policy and Advocacy volunteer JEMIMA HOFFMAN writes about the recent launch of our #JusticeSolutions report, and why Victoria’s youth justice system must focus on prevention, diversion and rehabilitation. 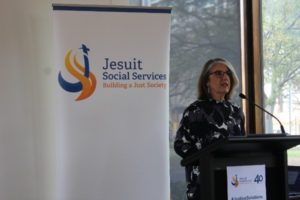 At the report launch on 29 August 2017, Jesuit Social Services CEO Julie Edwards outlined what she had learnt about the common elements of successful overseas models, with discussion on the current youth justice environment in Victoria from Victorian Aboriginal Legal Service CEO Wayne Muir and National Sector Leader in Justice and Security, Penny Armytage.

At this critical time there are important lessons that can be learnt by looking to our international counterparts in youth justice. The #JusticeSolutions report found that incarceration must be used as a last resort, and where necessary, should be in small community-based settings that enable normality and ongoing engagement with family and community, prioritising education and building skills for life. Throughout the study tour, “successful youth justice systems” consistently focused on “rehabilitation, re-education and “resocialisation”, said Ms Edwards at the report launch.

Ms Armytage outlined key findings from the review of the Victorian youth justice system that she and Professor James Ogloff completed, which found that spending in youth justice is geared heavily towards the tertiary end of the system. Ms Armytage explained that if detention is truly to be used as an option of last resort, then there must be increased exploration and utilisation of community-based alternatives to detention.

At the report launch, Mr Muir challenged the audience to think about how we would fundamentally shift our approach to youth justice if we wanted to see better results. He remarked that doing the same thing over and over but expecting different results was the definition of madness, and compelled us to “break the mould” and instead “start to have a serious look at some of the international examples”. Mr Muir emphasised the overrepresentation of Koori young people in the justice system citing a number of reasons including systemic racism, over-policing, and young people’s disconnection from culture and country.

To shift the “appalling statistics” on Koori overrepresentation in the justice system, we must ask ourselves “what we are prepared to do that is fundamentally different”, said Mr Muir. He called for investment in young people, to give them hope and provide them with support. On top of this, he maintains that we need to create a youth justice system that is culturally safe and fosters connection to culture and country, whilst still providing education and interventions that build life-skills.

The report launch provided an opportunity for people to come together and have a much needed discussion about the direction of youth justice in Victoria. The #JusticeSolutions tour provided Jesuit Social Services with a valuable insight – if we can empower young people with education, build trusting relationships and maintain their connection with community, we can help them to live healthy and crime-free lives.

Jesuit Social Services continues to call on Victoria’s political leaders to articulate a clear vision for the state’s youth justice system based on prevention, diversion and rehabilitation.