As part of our ongoing blog series highlighting the learnings of our Justice Solutions tour, Jesuit Social Services’ Chairman PATRICIA FAULKNER reflects on the many ways New York City is on the pathway to reform. 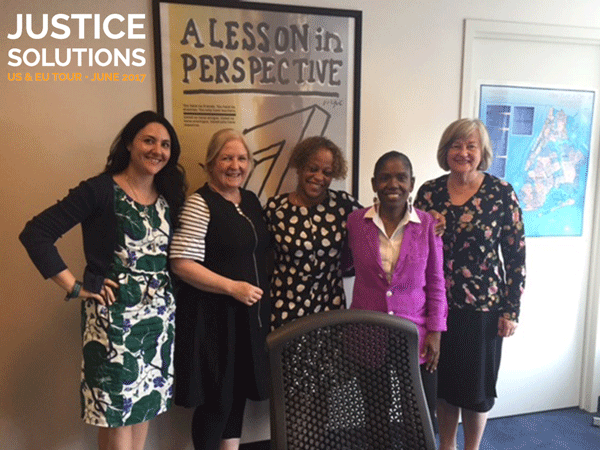 Jesuit Social Services’ Cath Neville (second from left) and Patricia Faulkner (right) with staff from the NYC Department of Probation.

Today is the last day in New York City on our Justice Solutions tour. Over the last few days we have met with staff from policy think tanks, who gather data and evidence and campaign for reforms in justice systems. We have also met with staff from government agencies and not-for-profit organisations who are implementing a raft of reforms to the way in which juvenile justice is delivered.

New York City is on the pathway to reform. This is well overdue, given the long history of unnecessary incarceration of the poor and excluded, particularly people of colour.

This reform is being driven by a broad coalition of practitioners, researchers, advocates, clinicians interested in children’s brain development, not-for-profits and philanthropically funded research institutes that compile persuasive data on the impact of varying approaches to juvenile justice.

What was a little surprising to me is that this reform has also been supported by fiscal conservatives as well as right wing faith communities who see the sense and fairness in pursuing such an agenda.

How New York City is reforming its justice system

Reform in New York is happening on many fronts:

We still see attention to security, yet there is an increasing acceptance that there needs to be a focus on (re)socialisation, and based on evidence that the brain of a young offender is still developing and changed behaviour is possible.

How New York City’s justice system compares to ours

So, what do I see as the differences between Victoria, Australia, and New York City?

First, New York City politicians are driven by a political imperative to redress the harm that is done through the incarceration of young people, particularly the harm to the people of colour.

Incarceration does damage to a young offender through the mere separation from family and community. Victorian politicians weigh this as less important than a perception of fear in the community about young people’s behaviour.

Second, Victorian politicians are less attentive to evidence and costs. They are prepared to adopt higher costs and less effective solutions to deal with overstated fears in the community which are amplified, not analysed, by journalists.