As part of our ongoing blog series highlighting the learnings of our Justice Solutions tour, Jesuit Social Services’ CEO JULIE EDWARDS shares her concerns about Victoria’s political leaders committing the state to ineffective, costly and unsafe practices and policies. 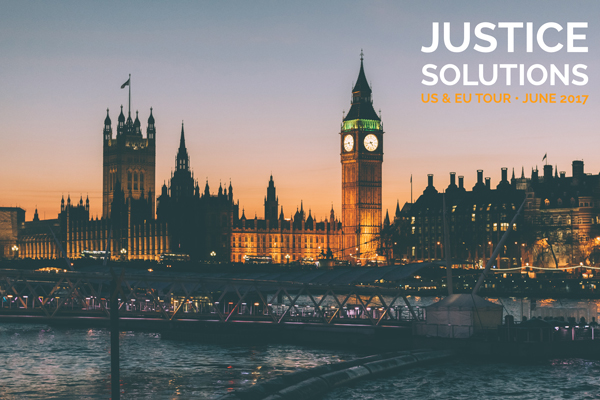 In London, Sally Parnell, Executive Director of Programs at Jesuit Social Services, and I have spent our time meeting people and organisations working in the criminal justice space, including those delivering community responses such as Circles of Support and Accountability, and agencies that resonate with Jesuit Social Services’ initiative, The Men’s Project.

I renewed our contact with the Prison Reform Trust, where we had a very fruitful conversation. Our countries experience some similar problems, political dynamics and attempted solutions.

It has been interesting to note that in each country we’ve been that, just as is the case in Australia, the rate of youth offending has been going down. This international trend which has been occurring over at least the past five years, means that most countries have responded wisely by closing detention centres, saving public money and also reinvesting in further crime prevention, diversion and community alternatives to the extremely expensive option of building and maintaining prisons.

It is widely recognised that relying on imprisonment, especially of young people, to keep the community safe is bad policy on a number of counts. The research is clear that this approach makes the community less safe; it soaks up resources that should be directed to public health, education and housing; it does not turn around the lives of the young people concerned whose brains are still open to be positively influenced if effort is made to achieve this.

How tragic then that Victoria is actively pursuing a direction that has been widely discredited as ineffective, costly and making our community less safe.

Also of concern was to hear the experience of our international colleagues that bad policy can derail the justice system, setting it off course for many years. I am most concerned to see politicians in Victoria (Government and opposition) committing our state and our citizens to years of ineffective, costly and unsafe policies and practices – all this without reference to research about what works, but rather with reference to what they believe is community sentiment and to parts of the media intent on whipping up fear and anger in the community.

We have yet to see the business case for the new Victorian youth prison. The community should demand no less. We have a right to be safe, a right to ensure accountable use of tax payer funds, a right to see our young people supported and monitored along a pathway to a productive, crime-free future will benefit us all.