As part of our ongoing blog series highlighting the learnings of our Justice Solutions tour, Jesuit Social Services’ CEO JULIE EDWARDS reflects on her visit to the Hameln Youth Justice Facility in Germany, where efforts are focused on the successful reintegration of young people back into the community. 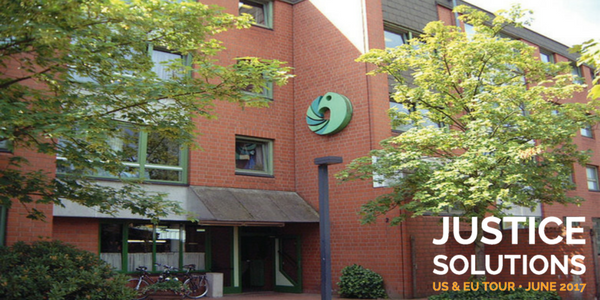 At the heart of this model is a strong diagnostic and planning methodology. All efforts go to reintegration or resocialization of young people, with staged options for transitioning to community using a combination of leave (from short accompanied periods to full days), part-work or part-education in community and a young person progressively spending more time in the community prior to release.

The facility also has a very comprehensive focus on trade-based qualifications, with clear line of sight to employment. Many young people leave prison with a good chance of a job in the trade they have been trained in.

Participation in school or vocational education while in prison is compulsory, and social learning/modelling of pro-social behaviour is embedded in the principles of the prison.

Sally and I had a very interesting day meeting with Wolfgang Kuhlmann, Head of Prison; Esther Cahn, psychologist and head of social therapy program for serious violent offenders and sex offenders; and Christina Jesse, Director of Prison Dept, Ministry of Justice Lower Saxony.

They outlined how young people enter the facility via the Assessment and Diagnostic Centre, where they participate in an intensive four to six-week period of diagnostic assessment and testing, focused on developing a plan to reduce each individual’s unique criminogenic risk factors (they draw on the Risk-Need-Responsivity principles).

From there, young people are assigned to a differentiated eight-bed unit, dependent on their individual criminogenic profile and needs (eg degree of vulnerability or self-confidence; level of motivation to change etc; alcohol and drug use, mental health or psychiatric needs).

Various options have been trialled over the years in terms of mixing various groups. The comment was made that the more staff you have, the less need there is for differentiation. A secure unit of 15 beds is also available for young people with threatening, violent or dangerous behaviours – the aim is to move young people eventually from this unit back in with a mixed, more functional group over a six week period.

The ‘social therapy’ unit works with serious violent offenders and sex offenders with a treatment model of 18 months to two years, running a mix of individual and group sessions.

They also run a separate campus geographically separate from the prison for up to 70 low-risk young people who are transitioning back to community – with no fences, akin to student accommodation – with emphasis on accompanying the young people, building, independence and encouragement – staff as coaches and mentors. This campus has strong links with the assessment and diagnostic team who monitor the transition to community. Most young people are either engaged in work or education.

The prison head has a background in psychology and the focus on treatment planning has been consistently built up over many years. Again, staff skills and qualifications are of a high standard, with a mix of social workers, psychologists, trades teachers and prison guards. We witnessed positive and respectful interactions, a climate of respect and an integrated approach to individual’s treatment plans.  Strong links (akin to co-case management/care team approach) with Probation services is also part of their model.

When we asked the two trades trainers in the woodworking area to estimate how much time they spent on encouraging a climate of positive interaction between the 14 young people in the workshop compared to a focus on their trade skills, they indicated 50/50 ratio of their effort went to each.

Christina Jesse, Director of the provincial Ministry of Justice, had a very grounded sense of both practice and policy settings. Among other things, she spoke about restorative justice approaches, indicating that Germany is only beginning to introduce this practice. She sees this as the way of the future and as an evidence-based approach which is now gaining momentum in Germany.

Throughout the day the people we met with talked of declining youth population in Germany, crime prevention measures implemented over many years at school level, relatively high rates of employment etc as contributing to the reduction in crime rates. The Violence Prevention Network headed by Thomas Mucke in Berlin has played a key role in anti-radicalisation and anti-violence interventions in prisons.

The main message we took away from the day was a very clearly defined model and approach in Hameln, with a big emphasis on thorough assessment, staged transition, a culture of respect and the tailoring of programs for each individual to address criminogenic factors.