As part of our ongoing blog series highlighting the learnings of our Justice Solutions tour, Jesuit Social Services’ CEO JULIE EDWARDS writes about her visit to Norway’s Halden Prison, dubbed “the world’s most humane prison.” 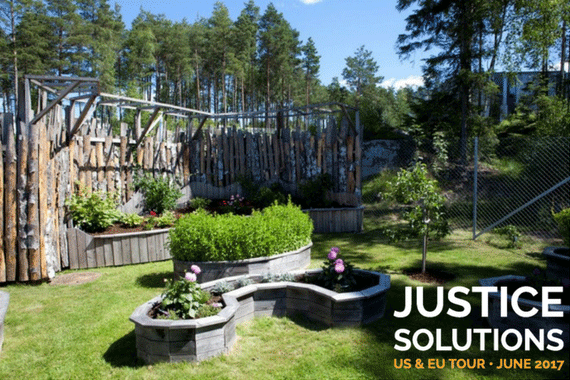 Sally Parnell, Executive Director of Programs at Jesuit Social Services, and I travelled from Oslo for about 120 kilometers to Halden where we visited the high security prison there.

The prison has been tagged ‘the world’s most humane prison’ so we were keen to see it. Much has been written about this prison – about the built form and how the prison has been designed to facilitate the operationalising of the principles that lie at the heart of the Norwegian prison system – principles like ‘normality’ and ‘importing staff’.

The Governor Are Hoidal spent hours with Sally and I, showing us around the prison, introducing us to prisoners and staff. Given the amount of readily available information – about the prison,  its underlying philosophy and practices like strong focus on meaningful activity, programs, arts and music, and strong reintegration back to community – I won’t expand on that here.

What I want to note is the ‘feeling’ of the prison – the atmosphere. This is no doubt due to numerous factors, but it was tangible.

Factors like the attractive physical environment, the mix of prison staff and staff from the local community, prisoners in casual clothes, the relaxed interactions between people such as a prison officer playing cards with a couple of prisoners, with us walking by, stopping for a chat.

Prisoners are not forced to do programs or activities – the Governor said to us on a number of occasions that it is counterproductive to force people to do things and much better to motivate them. A key to this motivation is the quality of relationships; each prisoner has a contact officer who builds a strong relationship with him. This prison guard has a focus on three prisoners, each of whom are in the small unit he works in. One young prisoner told us how important this relationship was to him – someone who looked out for him, whom he trusted and whom he could approach any time.

Towards the end of our visit we were introduced to one of the chaplains. We were amazed and delighted to learn that she was about to lead a 21 day silent retreat for about half a dozen prisoners, which she does annually – an Ignatian retreat using the Spiritual Exercises of Ignatius! She was equally surprised to learn we were from an organisation within the Ignatian tradition.

This confirmed for me that at Halden Prison there is an openness to trying a range of different approaches and interventions, with the goal of helping prisoners to understand themselves and others, to aspire to a better life and to grow towards that – all based on the central feature of respectful relationships.

Time for states to show true leadership and #RaiseTheAge