A group of visiting Bangladeshi public and private officials have learned more about the way Jesuit Social Services works with vulnerable young people. 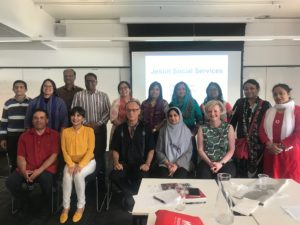 This week, coordinators of the Just Voices Speakers Program Danielle Sherry and Paulie Stewart teamed up with Indigenous artist Dave Arden to discuss the work of the Artful Dodgers Studios with at risk youth in Collingwood, before meeting with the Bangladeshi visitors at Deakin University.

Danielle Sherry spoke about many young participants on the verge of extreme behaviour access the arts and music facilities run by the Artful Dodgers.

“For many it has been a life changing experience. We recently had a young man come into the studio to tell us he was a former participant and at the time, was homeless. He said Artful Dodgers was the hug he needed. He was supported to imagine another path for his life and now he runs his own business in the city, working with artists and employing staff,” she said.

The presentation also focussed on ways Just Voices is working to engage young people willing to share their stories to promote a deeper understanding within the community of the lives of people at risk of, or living with, extreme marginalisation.

“There is nothing more effective than a young person hearing another young person share their experiences. Our speakers have become community leaders and influencers. Giving them a voice changes lives.”

“Many of the young people we have presented for say this approach is far more effective method than having a lecture by a visiting ‘priest, policeman or politician,’ said Danielle.

The visitors were particularly fascinated by Koori singer/songwriter Dave Arden’s Aboriginal culture and his insights into the circumstances that have led to a huge Indigenous youth population in our prison systems.

“I was a young kid myself who feel into bad habits because I was disconnected to my culture,” he explained.

“It was through my music that I found a voice and a purpose. My mob know all about anger and despair amongst our young people so I can relate to the work of our visitors.”

The visiting Bangladeshis provided our presenters some fascinating insights into their own country. During lighter moments, the visitors found it fascinating hearing Australia owed the camel drivers of Afghanistan, Pakistan and Bangladesh a huge debt as they had been the ones responsible for opening up the outback and centre of Australia.

Following on from talking about the Men’s Project, The group also discussed gender equality in each of our communities.

“I praised the group for having so many women involved and was very quickly told that this was not uncommon in Bangladesh which has a female Prime Minister and a female Speaker in the house of Parliament,’’ says Paulie Stewart.