Held in Sydney in partnership with the Old Ignatians’ Union, the latest Just Leadership breakfast featured Michael Coutts-Trotter as guest speaker. Michael is a prominent Saint Ignatius’ College Riverview old boy, who currently heads the NSW Department of Family and Community Services (FACS). His past roles in leadership included the Director-General of the NSW Department of Education and NSW Department of Commerce. Michael has faced issues throughout his life, both professionally and personally, and is constantly challenged in his career at the highest levels of government leadership.

Dave Hammond, General Manager of our work in NSW reflected on Michael’s presentation at the breakfast. He said, “Those gathered at the Just Leadership Breakfast in Sydney this week were given a confronting reminder that it’s not how the story begins that matters, it’s how it ends that counts. Michael Coutts-Trotter gave a profound and very personal account of his journey from convicted heroin trafficker and user to where he is now, leading FACS, the government department charged with caring for some if the most vulnerable people in NSW. Michael’s humility was inspirational as he told us of how so many people had gathered around him providing sustained and long term support. I was left with a deep sense that it is possible to not only help those who have lost their place in our society but that by making a long term commitment those people can become some of our most capable and effective citizens.”
Just Leadership breakfasts are designed to engage, inspire and challenge you to action no matter your age, gender or life stage. They offer an opportunity to hear from people who are challenged with issues of justice and conscience in their positions of leadership. 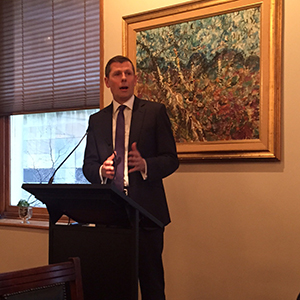