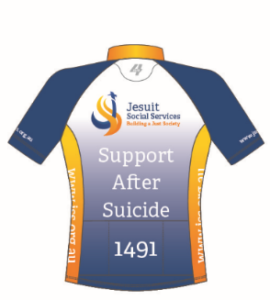 On April 7 and 8 2018, staff and friends of Jesuit Social Services will take part in the Murray to Moyne, a cycling fundraising event for experienced cyclists that has been running for over 30 years. The ride will raise funds for our Support After Suicide program, which provides services for children, young people and adults bereaved by suicide.

The Murray to Moyne was founded in 1987 and has helped raise millions of dollars to promote health services in Victoria. The event covers over 500 kilometres from Swan Hill to Port Fairy and is completed as a relay over 24 hours.  Jesuit Social Services’ team is made up of 24 riders and four support crew including Susan O’Brien (General Manager Human Resources) and Colin Charles (Bereavement Counsellor for Support After Suicide).

Susan says that she motivated to complete the ride by knowing many people who have experienced the impacts of suicide. “I know how important having this support is for so many people. Suicide does not discriminate and many friends have experienced it either within families or friendship circles.”

Colin, who has worked in the Support After Suicide program for seven years, says that the money raised from the ride will help fund the delivery of programs like Serious Fun and the Adventures Program for children and young people, which allow them to meet with others who have had similar experiences. He says “$5000 would enable us to run the Serious Fun program for a year, run two camps and maybe a couple of activity days for young people.”