Jesuit Social Services CEO Julie Edwards recently spoke at a seminar, held at Newman College in the University of Melbourne, to celebrate the first five years of Pope Francis’s ministry. 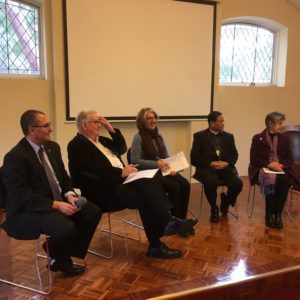 Julie spoke specifically about Pope Francis and migration issues, highlighting that Pope Francis’ pastoral attention towards concern for migrants and refugees has provided valuable moral leadership and drawn the international community’s attention to its responsibility to care for our most vulnerable people.

She spoke about Pope Francis’s message for 2018 world day of migrants and refugees, which reminds us that migrants and refugees constitute the most vulnerable members of our communities; as marginalised strangers, they deserve privileged attention on account of our faith.

“It is clear we have a long way to go to improve our care for those refugees and people seeking asylum that have travelled to our land by irregular means,” she said.

“Australia continues to place the lives of these refugees and people seeking asylum indefinitely on hold, whether that be offshore in regional processing countries or on temporary protection visas in Australia.

“People seeking asylum in our communities are facing arbitrary cuts in their accommodation and welfare support, leaving many to face destitution and potentially overwhelming our charities and community sector.

“Like Pope Francis, we should be questioning how much we weep for the human tragedy happening before us among the ‘strangers in our land’.”