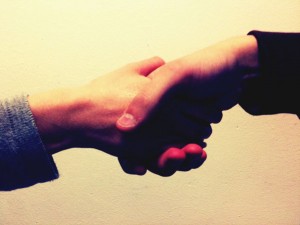 Of the United Nations Days and Weeks, Interfaith Harmony Week is one of the most recent and perhaps the most modestly celebrated. But it may also be the most needed.

The week originated in a proposal of King Abdullah of Jordan, a Muslim. He recognised that the great religions were united by their call to love God and their neighbour. They could come together on that basis without minimising the differences between them.

In Australia small local committees sponsor breakfasts, talks and gatherings to mark the week. These complement the all important personal contact between people of different religions who are open to learn from one another about one another’s faith.

These small initiatives and conversations, of course, are tiny when set against the violence in the name of religion that plagues the Middle East and elsewhere. There people of different Islamic groups and of other religions have been persecuted and polarised by IS with its corrupt and violent version of Islam. Hostility has been intensified by the intervention and destruction brought by foreign powers, which are then readily portrayed as anti-Islamic. Conflict fed by personal, political and economic interests is then framed in religious terms.

The conflict in the Middle East and terrorist incidents in other nations often provoke tense relationships between Muslim immigrant communities and the majority population in their host countries. This tension expresses itself in religious and ethnic prejudice and discriminatory laws, which in turn contributes to fear, withdrawal and alienation in Muslim communities. Disenfranchised young Muslims are then vulnerable to recruitment by IS. So the cycle of violence is continued.

To break this cycle requires serious efforts to create interfaith harmony based on a sympathetic understanding of other people and what their faith means to them. In Western countries, including Australia, it is unreasonable to expect that Muslim leaders of Islam, preoccupied with supporting their often poor and harried immigrant communities, will be able to take the initiative in this.

So the task must fall on the leaders of Christian churches, first in the spirit of Pope Francis in the Catholic Church, by first going out to seek trusting relationships with significant Muslim religious leaders, and then making similar relationships between Muslim communities and their own a high pastoral priority.

When people who are Muslim meet people who are Christian and explore each other’s lived faith, the prejudices based on the selective quotation of texts, polemical pamphlets and the listing of historical atrocities are exposed for the rubbish they are.

Because the task of building interfaith harmony is vital for societies at large and not simply for the churches, it needs to be encouraged in appropriate ways at all levels of society. Such faith-based community organisations, such as Jesuit Social Services, which welcome Muslim workers and are present among Muslim communities in Australia, encourage conversations about the place religious faith has in life.

That conversation cannot be confined to the churches. In the present cycle of violence and discrimination which focuses on religious difference, the negative tolerance generally adopted in Western societies is not enough. In negative tolerance there is an implicit contract neither to interfere with the religious practice of others nor to enter into serious conversation with them about it. Under that regime discrimination and alienation grow.

In society at large prejudice and hostility can only be countered by exploration and appreciation of other people’s religious beliefs and practices, not in order to adopt them, but because they are important to our fellow human beings. That is not easy, of course, because in such conversation our own convictions and prejudices, religious, non-religious or anti-religious, will also be in play.