With the latest data showing suicide is on the rise in Australia, it is vital that postvention services like Support After Suicide have access to secure, long-term funding to help people navigate grief and trauma, writes Jesuit Social Services’ Media Relations Manager KATHRYN KERNOHAN.

When Greg’s daughter Cassie took her life in 2012, aged 16, Greg felt that life would never be predictable again.

In the weeks afterwards, he was referred to Jesuit Social Services’ Support After Suicide program, and found solace in meeting with others who had also lost a loved one to suicide.

“You realise that you’re one of around 3,000 families across Australia that experience the same emotion each year,” he says. 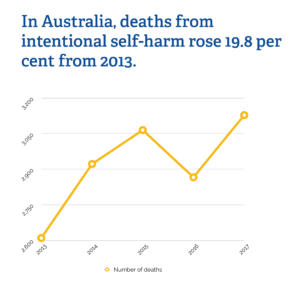 Sadly, the need for services such as Support After Suicide remains as strong as ever. According to the most recent Causes of Death report published by the Australian Bureau of Statistics, the number of people who died by suicide in 2017 rose by 9.1 per cent from 2016.

In 2017, a total of 3,128 people died from suicide across Australia. Deaths from suicide account for a greater proportion of all Aboriginal and Torres Strait Islander deaths (5.5 per cent) compared with deaths of non-Indigenous Australians (2 per cent).

These are sobering figures – but a program like Support After Suicide remains significantly underfunded.

In our 2019 Federal Election Platform, A more compassionate Australia, we call on the incoming Federal Government to develop secure, long-term funding for postvention and suicide bereavement services including Support After Suicide.

We have operated Support After Suicide throughout Melbourne and regional Victoria since 2004 to provide counselling, support groups and online resources to people bereaved by the suicide of a loved one.

The need for this specialized service is significant given the mix of grief and trauma associated with suicide on those left behind. Research has shown that those impacted by suicide are at a heightened risk of taking their own lives, so adequate support is vital to potentially prevent further suicides.

The program is funded by various Primary Health Networks (PHNs) across Victoria. This model was established in 2015 to enable local organisations to deliver suitable services to meet local needs.

However, as each PHN has different reporting and evaluation requirements, there is a sizeable administrative burden on a specialist service like Support After Suicide.

Our Federal Election Platform also recommends the establishment of consistent reporting and evaluation requirements across PHNs to reduce this burden.

Additionally, while Support After Suicide operates in regional areas, its ability to provide robust services in spite of increased demand is limited due to restricted funding, and we call for increased access to suicide bereavement services for regional and rural areas.

For Greg, Support After Suicide provided an opportunity to connect with creative outlets to express his grief. He was involved in a creative writing group that playwright Rebecca Lister facilitated with Support After Suicide participants, with works that emerged from the group later published in a book called The Cost of Silence.

“It was very valuable to use writing to capture emotions. I had gone from personal devastation to trying to produce things for the public domain that would help others,” he says.

In 2018, Greg, alongside other program participants, was interviewed by Rebecca Lister as part of the creative process for contemporary drama 2:20AM. The play, which explores the grief associated with suicide, premiered in Melbourne last year.

“Support After Suicide gives people all sorts of opportunities to connect with each other. I cannot stress how valuable and important this program is,” he says.