The single largest barrier to employment for migrants and refugees in Australia is the lack of opportunity and quality work experience. The African-Australian Inclusion Program (AAIP) breaks down this barrier by providing six months of paid work, mentoring and career coaching to qualified African-Australians.

Recently, the AAIP celebrated its 300th participant. Atway Akec shares his story of perseverance and his desire to create a good life for his son.

Atway fled from war-torn Sudan with his family when he was nine. He lived in Egypt for a few years and then migrated to Australia in 2003. His mum inspired him along the way. 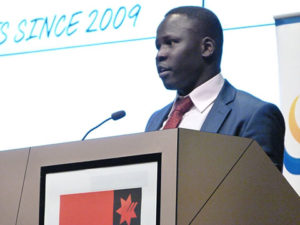 “Growing up, I’ve watched her work up to three or four jobs at a time to support us,” he said. “And she’s always encouraged me to make full use and take advantage of this great country and the great opportunities this country has to offer.”

When he arrived in Australia, Atway was thirteen and spoke no English. He ended up finishing high school with an applied learning certificate (VCAL), but didn’t have the confidence to pursue university. Instead, he went from job to job, including at an abattoir, a chicken meat processing plant and, more recently, at Coles Express. Regrettably, he was no stranger to racism.

“Trust me I used to cop it a lot,” he said of his time serving customers at Coles. “I’ve had a lot of horrible things said to me.”

While his life experiences have given him a tough skin, he’s still frustrated by the media coverage of Sudanese youths that feeds a stereotype that can lead to misunderstanding.

“They always shine the light on the bad side, so now most people would think a lot of Sudanese are like that. You know I almost in a way sympathise with them, because it’s all they see.”

Atway wants to change this misperception, and be a role model for his family and community.

While working at places such as Coles, he completed a Bachelor of Commerce with a triple major in Economics, Finance and Financial Planning. He also volunteered to help people who are facing some of the challenges that he has overcome.

“I wanted to volunteer so that I can give back to my community,” he said, “make the new migrants feel welcomed, feel like they’ve got someone they can go and talk to if they’re unsure about something.”

It was through his volunteering that he heard about the African Australian Inclusion Program (AAIP), run in partnership by Jesuit Social Services and National Australia Bank (NAB). In May this year, he became the 300th African Australian to enter the program.

While Atway has made his own luck, he knows that there are many who still fight against prejudice and struggle to get a break.

“A lot of African Australians struggle to get their foot in the door,” he said. “It could be even your name – a non Anglo-Saxon name – that could excuse you from a job.”

“I’d love to just tell them that there are good support systems if you do the right thing. There are people out there that are actually willing to help you. At NAB, for example, I have four people that are there willing to help me and are very, very interested in me succeeding.”

Atway now has a three-year-old son of his own, Carter, and is keen to be the role model that his mother and elder brother were for him.

“If he wants to become a banker, just like his father, he can go ahead and do that too.”

This story is republished with permission from NAB.