How 16-year-old Steven moved from truancy to carpentry

When Steven dropped out of school, the Navigator program helped him back into training. SEZ WILKS checks in on Steven’s successful shift from school to trade. 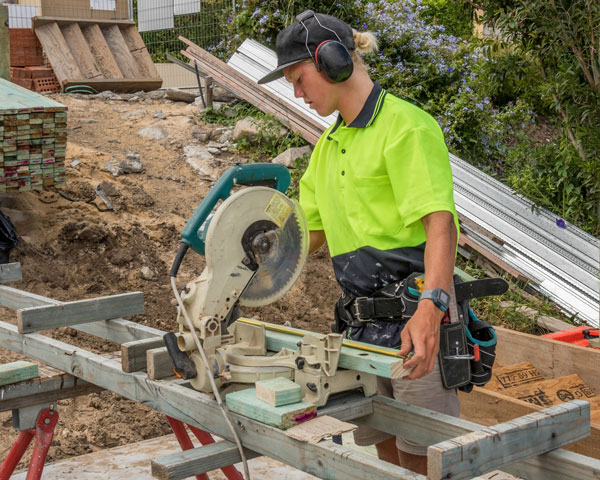 When 16-year-old Steven’s school referred him to the Navigator program, he’d barely been to class all year.

“School’s not doing it for me,” he told his Navigator caseworker, Johnny Cheung-Fook, when the pair met in September 2016.

Run by Jesuit Social Services in Melbourne’s Hume and Moreland areas, Navigator works with young people aged 12-17 who have disengaged from school. Navigator staff work one-on-one with young people, their families and their schools to re-engage them in education or training.

Steven was struggling with a difficult home life, living with his mum, siblings, grandparents and uncles in one of Melbourne’s most severely disadvantaged suburbs. He’d been expelled from a previous school and had started hanging in with the wrong crowd, breaking into cars and houses.

When the group was caught by the police, Steven was fortunate to not get charged. Johnny used the incident to remind Steven of the support he had around him.

“I’d say, ‘There’s so many people behind you – even the police! They wouldn’t charge you because they believed in you.’ And I’d see his mood come up.”

For the first few months of support with Steven, Johnny focused on building rapport and relationship, suggesting different ideas and seeing what sparked. He also liaised with Steven’s school to try out different learning pathways.

“We talked about a modified timetable, what subjects he was into, to try and bring him back. But Steven was really honest with me. He said, ‘It’s not for me’.”

Steven admitted that he felt responsibility to find work to support himself, as well as his mum and his two sisters, so they could move into their own accommodation.

Johnny explained that without an education, Steven would struggle to meet his goals – and may be at risk of further contact with the justice system.

Reflecting on this, Steven told Johnny he’d always been interested in getting a trade. With school holidays almost over, he decided to pursue carpentry.

At the start of 2017, Johnny connected Steven with a TAFE provider, helped him enrol in a carpentry pre-apprenticeship, and secured a last-minute grant to cover his fees.

Having seen Steven’s grant application, the head of the carpentry department asked to meet him in person.

“The meeting was awesome. She told him, ‘I’ve been where you are. I grew up in rough parts of Melbourne and being female I had to fight for where I got to, in a male-dominated trade. And I did some silly, stupid things. But if you’re willing to commit yourself to this course, I can help’.”

Johnny checks in with Steven’s tutors. They’ve told him that Steven stays right to the end of class, even when there’s an option to leave early.

“Here’s a kid who didn’t do anything the year before. Now his mum’s rapt, his grandma’s rapt, his uncles are rapt. He’s a beautiful kid and I wish him all the best.”