Homelessness is a scandal and must not be allowed to continue 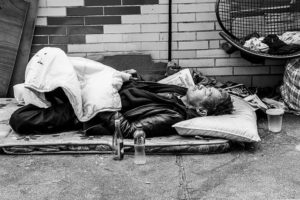 National homelessness week is always an embarrassment. And rightly so. We pride ourselves that we are a respectful society, but there is no greater sign of disrespect than to allow people to be homeless. Nothing eats into our self-respect more than to wonder where we and our family will sleep tonight.  Too many Australians are in that situation. Too many sleep on the streets; too many families sleep in their cars.

In many of our cities this year homeless people are more visible than usual. They put their bedding on the footpaths, congregate at night in public squares, and are more in the news. Some people demand that they be ‘moved on’; others insist that accommodation be found for them; governments and municipal councils seek for solutions.

Many reasons are given for their greater visibility. The most obvious is that many more people are homeless. Experts point to the shortage of housing, particularly of public housing, and of affordable rental housing. This leaves people who lose their jobs or fall ill more vulnerable to homelessness. The increase in the number of homeless people is yet another marker of a society in which the economy does not serve the needs of ordinary people, let alone the urgent needs of the most disadvantaged.

Some people who live on the streets say that in temporary shared accommodation they are vulnerable to robbery and violence. Many young people have never had a home worthy of the name. At the earliest opportunity they have left violent or neglectful homes. They also lack the social skills and opportunities to learn or to work.  So they find themselves homeless in the city, at risk of exploitation and addiction.

People who are homeless are also beginning to organise. They come together at night for protection, and demand long-term housing as a right, not as a privilege.  This encourages their self-respect and pride and counteracts the shame homelessness can bring. They have learned that invisibility nurtures neglect, whereas being seen and heard opens the way to change.

To address the conditions that contributed to people being homeless is more complex. But that, too, begins with seeing homeless people as people, and first asking them how they came to be on the streets and what forces them to stay there.  Their answers will be various. They will speak of a violent and neglected childhood, of mental illness, of the lack of opportunity to learn or work, of addiction and ill fortune, of the lack of emergency accommodation and of money.

For many vulnerable young people these afflictions are part of their lives.  That is why homelessness is often a reality, and always a threatening possibility, in their lives. For that threat to recede they need support in connecting with society. And of course a necessary support to staying connected is secure and lasting access to shelter.

It is easy to walk past people who are evidently homeless, to avoid their eyes and eventually not to notice them. It is a little harder to drop money in their tin as we pass by. We may find it a little harder still to stop and chat, interested to hear their story and tell our own.  But only when we do that do we see them as people like ourselves and ask how things can change for them and us.

What can change in us is our tolerance of an economic and political ideology that assumes it is all right for the humanity of the vulnerable and ill to be neglected in order to protect the entitlements of the wealthy. The cold winds that blow unchecked under the bridges where the homeless sleep have their source in an arctic economic world that puts profit over people.