Jesuit Social Services - Give people a home, and you give them a second chance to get their lives on track

Give people a home, and you give them a second chance to get their lives on track

Unstable housing is the most significant factor affecting the likelihood of somebody returning to prison. If we want to reduce re-offending and create a safer society, we must ensure people leaving prison have access to safe and secure housing, writes Jesuit Social Services’ Policy, Research and Advocacy Officer JEMIMA HOFFMAN.

The recidivism rate in Victoria is growing.

In 2016-17, nearly half (43.6 per cent) of the individuals leaving prison in Victoria went on to reoffend within two years. 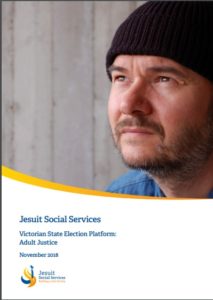 This figure has risen from 36.8 per cent in 2012-13 – meaning that more people are returning to prison and demonstrating that something is not working in our justice system.

We must turn our attention to the supports available to people as they exit prison to prevent reoffending so they go on to productive, healthy lives in our community. Housing is a critical starting point.

29 per cent of people leaving prison in Victoria sleep rough, or stay in short-term or emergency accommodation upon release. Having stable, affordable, appropriate housing can make a significant difference in the life of a person leaving prison and whether they reoffend. In fact, the Victorian Ombudsman reported in 2015 that unstable housing is be the most significant factor affecting the likelihood of returning to prison – but less than two per cent of prisoners have access to housing through state government programs specifically for former prisoners.

Unstable or unsafe accommodation is not only a risk for reoffending. For many women, leaving prison means returning to situations of family violence, when no other housing options are available to them. One Australian study found that young females under 25 had 20 times greater risk of death than their counterparts in the community, which was higher than any other group of post-release prisoners, including young men.

At this Victorian State Election, Jesuit Social Services is calling on the elected Victorian government to invest in a range of housing options for people leaving prison. A number of existing models have been shown to produce better outcomes – reducing recidivism, protecting the community, and ensuring support for vulnerable people.

A small number of male prisoners can access 25 beds at the Judy Lazarus Transitional Centre, which has been found to reduce recidivism and better prepare people for transition back to the community. This model provides a staged release which has been shown to help people develop the skills and confidence to live in the community. The elected Victorian government must replicate the Judy Lazarus Centre model on a more substantial scale to enable a greater proportion of the prisoner population to access intensive transitional support.

Jesuit Social Services’ Next Steps program provides supported accommodation for young people aged 16-24 who have been involved in the criminal justice system and are at risk of, or experiencing, homelessness. At this State Election, we call on the elected Victorian government to fund a housing model statewide, similar to Next Steps, for women transitioning from prison back into the community.

Our Victorian State Election is a time for us to reflect on the sort of community we want to live in. We all want a Victoria that is safe and secure. To address crime, we must hold people to account. But we must also tackle its root causes in order to prevent it. Let’s give people a home, and a second chance to get their lives on track.

For a full list of our recommendations, read our Victorian State Election Platform: Adult Justice.