Twenty years ago Jesuit Social Services established the Artful Dodgers Studios as a way to use music, art and culture to engage with marginalised young people.

One of the longest running Community Cultural Development programs in Victoria, the Artful Dodgers Studios provides a flexible and welcoming space where young people can collaborate with experienced artists and musicians to increase social connectedness, self-esteem and employability skills – as well as re-engage with the learning process. 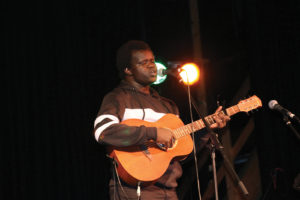 Clement of The Travellers performs at the fundraising event

The Victorian Government provides about a third of the annual ongoing costs of operating the studios, with grants and donations vital in meeting the shortfall.

To help raise funds for the Artful Dodgers Studios, The Gertrude Players, a non-profit orgainsation that raises funds for local projects recently held a trivia night at Collingwood Town Hall.

James Haines from The Gertrude Players says the partnership is “unreal”.

“We’re currently working with the Artful Dodgers Studios to provide youth with opportunities to persue artistic endeavours, while being mentored by established Australian artists.”

James, a lawyer by day, and his mother Margot visit the studios monthly to provide lunch to participants, staff and volunteers at the Artful Dodgers’ regular Megaphone concerts.

The sold-out trivia night featured performances by the Artful Dodgers participants including The Travellers and The Desolates, live and silent auctions and plenty of prizes and giveaways.

The Artful Dodgers Studios’ Coordinator Angeliki Androutsopoulos says the ongoing support of The Gertrude Players is a gift.

“It’s not only the money they raise for us but their belief in what we do which is so encouraging, not only for our participants but for our staff.”