Jesuit Social Services has 40 years of experience working with young people – including young people who have contact with the criminal justice system, young people from culturally and linguistically diverse backgrounds and helping young people towards pathways to education, training and employment.

Below is a story about Zak (pictured), a participant with the Industry Employment Initiative (IEI), which we operate in collaboration with Brotherhood of St Laurence, Mission Australia and Social Ventures Australia. 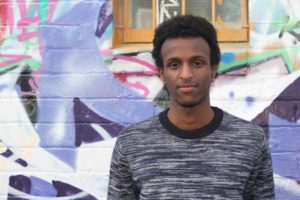 Youth unemployment across Australia has reached its highest peak since 1998 – and for those who have been out of the workforce for a long period of time the pathway to employment can be even more difficult.

Many young people begin their first job when they are still in school. But things didn’t work out that way for Zak Yusuf, who by the age of 20 had no employment history and was worried that the longer he was out of work, the harder it would be to get his first job.

“Lots of places say they will only hire people with experience but it’s hard to get that experience to begin with,” he says.

Last year, through a family member, Zak found out about the Industry Employment Initiative (IEI). The pilot program is a collaboration between Jesuit Social Services, Brotherhood of St Laurence, Mission Australia and Social Ventures Australia.

The demand-led model works with major employers like Coles and Goodstart Early Learning to understand their skill needs and vacancies, and then designs a training pathway to place long-term unemployed young people into roles.

Zak engaged with IEI through our Jesuit Community College where he completed a short course in learning about customer service, first aid and preparing for job interviews – “important things when you’re looking to get a job” – and was later placed into a group interview with Coles.

“It was a bit scary, but the College gave us some good advice around what to expect and how to prepare.”

To Zak’s surprise, he received a call from the store manager inviting him to join the team days later. He now works up to 20 hours a week and receives ongoing support from the College.

“Zak’s great with customers – we’re very lucky to have him as part of the team.”

The IEI recently expanded to Sydney, where Jesuit Community College has trained and placed long-term unemployed jobseekers into hospitality roles in five major hotels. The pilot aims to generate 125 job opportunities across Australia.

Zak hopes to continue gaining experience at Coles, and is grateful to Jesuit Social Services for the opportunity.

“I was getting worried that the fact I had no experience would make it hard for me, but now I think I can make it.”