Francis’ ordeal reveals failings of NDIS and the prison system

The story of a young man named Francis reveals significant failings of both the National Disability Insurance Scheme (NDIS) and the criminal justice system – and his plight must lead to better outcomes for people like him in the future, writes Jesuit Social Services Media Relations Manager KATHRYN KERNOHAN.

In November 2017, a young man with an intellectual disability made national headlines.

The story of Francis, a Victorian man aged 20, was covered on ABC TV’s 7:30 program. At the time Francis was languishing in a Melbourne prison charged with a criminal offence but yet to be found guilty of any crime. 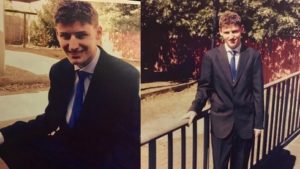 Francis (pictured) spent 180 days in prison without being found guilty of a crime – all because there was no suitable accommodation available to him in the community. Moreover, Francis was held in isolation for this period denied contact with others and handcuffed for the short time he was outside of his cell.

Francis had a NDIS (National Disability Insurance Scheme) package worth up to $1.5 million of support but had been refused service by disability providers due to his extremely high needs.

This is a clear failure of the NDIS to provide adequate support to some of the community’s most marginalized members, dealing with a range of complex issues – a failure that led to a young man incarcerated when he should not have been.

In our submission to Productivity Commission’s study on NDIS costs, we highlighted the need for clear mechanisms to ensure that service providers have the skills and capacity to work intensively with people with complex needs.

Francis’ story is a sad indictment on the failure of the system to achieve this. It is also a crucial reminder that the NDIS needs ‘provider of last resort’ provisions that prevent people like Francis from slipping through the cracks.

As a result of the media attention, Victorian Minister for Disability Martin Foley announced he would ensure Francis received adequate support.

Recently, all charges against Francis were dropped. Victoria Legal Aid, who represented him, issued a statement with Francis’ lawyer Lucy Geddes saying “for someone as young and vulnerable as Francis, who had never been to prison before, it was clearly the wrong place for him to be and a lack of support services kept him there for far too long.”.

Unfortunately, that is not where Francis’ ordeal ended.

The ABC reported last week on some of the challenges Francis has faced back in the community.

According to the report, Francis’ experience of spending up to 23 hours a day in isolation while in prison means that he now only feels comfortable when in a locked house with a wall separating him from his carers.

His parents communicate with him through a Perspex flap.

As our CEO Julie Edwards wrote recently in The Age, we regularly see the impact of isolation on people who have contact with the prison system.

We have worked with people who struggle with face-to-face contact with family or experience substantial muscle deterioration, making it extremely challenging to reintegrate back into the community.

A 2017 report by the Victorian Commissioner for Children and Young People showed that the use of isolation and lockdown is frequent in the state’s youth justice system – and it is not good enough.

All of the evidence around brain development shows that young people’s brains continue developing until their late 20s, and that people who have spent time in isolation are at heightened risk of self-harm or suicide.

In the particular case of Francis, it is clear that the prison system was not adequately equipped to support somebody with such a severe disability.

This was also highlighted in a project we ran in partnership with RMIT’s Centre for Innovative Justice, which supported people with acquired brain injuries and contact with the prison system to advocate for change.

The September 2017 final report of the Enabling Justice Project includes a range of recommendations to improve outcomes for people with disabilities who have contact with the justice system, including that Corrections Victoria introduce mandatory trauma-informed practice training for all custodial and community corrections officers.

A range of systemic failures led to Francis’ experiences – and we hope his story can lead to sustainable change to improve outcomes for him and others like him in the future.