Jesuit Social Services - For those who've come across the sea

For those who’ve come across the sea 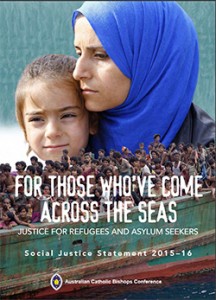 The 2015 Social Justice Statement of the Australian Bishops, For those who’ve come across the seas, is a must read. It tackles a  difficult topic – over seventy per cent of Australians approve of the harsh measures taken to repel people who seek protection  from us, and both parties support these measures.

It comes at a time when our attention is rightly focused on the plight of people seeking protection in Europe, and the call to  Australia to share the burden of caring for refugees from Syria. We support the Government’s commitment to accept these people  in need. It is a compassionate and right response.

The Bishops remind us that compassion may not be selective. Their Statement is uncompromising in insisting that human beings,  whether in Australia or in other nations, should not be pushed back, held for years in detention, transferred to harsh camps in  other nations, or left living an impoverished life in the community. It insists that it is unjust to disrespect so brutally one group of  people in order to deter others.

But the core of the Statement does not lie in denunciation but in encouraging its Catholic audience and others to imagine asylum seekers from inside. It sets the Catholic principles of social justice within the Gospel stories and the experience of people facing persecution in their own lives. It traces their journey and the sufferings it involves at each stage, from persecution in their own nations, to flight, to seeking a new beginning, to detention. It considers also the way that vulnerable people are affected at each stage.

The Statement also suggests a better policy, which will seem Utopian in a nation where politicians and people are united in seeing asylum seekers as a threat to be repelled with whatever brutality it takes. The Statement concludes with little things we might do to promote a better way.

The Bishops rightly focus on opening the eyes of our hearts and minds to the lives of the people whom we call, often to denigrate, asylum seekers. Without such a change of gaze there can be no change of policy. The challenge is put in a plea by a young man:

The Statement helps us to come closer to seeing, knowing and wanting to see and know. That is the starting point for responding to people who seek protection, wherever they come from and to.

People wanting to be part of the response can find out more from the Catholic Alliance for People Seeking Asylum (CAPSA).