Jesuit Social Services staff and participants were out in force recently on the opening day of one of Australia’s biggest community events The Brunswick Music Festival.

The recent festival opening day party held along Sydney Road Brunswick, had thousands of people flocking along to witness a smorgasbord of musical talent, taste multicultural food, check out the fashions on display, shop at hundreds of stalls and generally have fun in the sun.

For twenty-five years this much loved festival has celebrated live folk, roots, and blues music and the high quality of the festival programming and the welcoming atmosphere has drawn audiences back again and again.

This year, given the long time operation of our iconic Brosnan Centre in the Brunswick area, Jesuit Social Services were invited to take part in the festival.

They were looked after on stage by Artful Dodgers Studios producer and music course mentor Jesse Sullivan, while our studios coordinator Marianna Codognotto was also on hand to support the young artists involved.

There was also a Jesuit Social Services stall in Sydney Road, manned throughout the day by volunteer staff members who handed out information about programs at our nearby Brunswick office, as well as Collingwood-based programs Jesuit Community College and Artful Dodgers Studios.

For more info on events go to brunswickmusicfestival@strutnfret.com 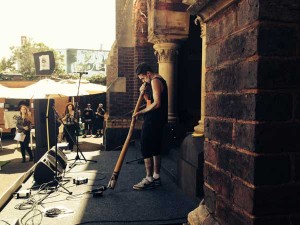