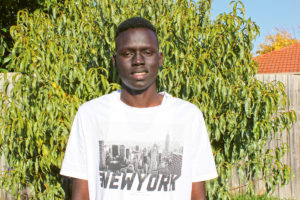 Akol has dreams of becoming a Doctor

When he arrived in Australia in 2017 after several years spent in a Kenyan refugee camp, Akol was ready to make the most of his new start. Akol and his family received intensive settlement support from Jesuit Social Services and partner agencies to help them to establish themselves in their new country. However it was the support to find a pathway into education that has made the biggest difference for Akol.

“The most important thing I came to Australia for was to study and have the opportunity to achieve a qualification, however I was older than I was supposed to be to be enrolled in school,” Akol says. With the help of the Migrant Resource Centre and Jesuit Social Services’ Settlement Program, 19 year old Akol was able to negotiate with the Department of Education and Training to be admitted into Year 11 at Victoria University Secondary College.

Being allowed to go to school has made a huge difference to Akol. “Without an education I don’t think you can succeed in life. I want to study medicine at the end of the year so that maybe in the future I can become a doctor.”

While making a new start has been challenging at times, Akol says that the support and encouragement he has received has helped him to dream of a better future. “Believe in yourself and you will have a better life. Don’t listen to what people say you cannot do, it’s up to you to make the right choice, to live a better life”.