Ecology in practice at the 2017 Jesuit Social Apostolate Gathering

Run by Jesuit Conference Asia Pacific (JCAP), the Social Apostolate Gathering is an annual opportunity for Jesuit ministries in the region to exchange information and build networks. GARRY ROACH, our General Manager of Practice Development & Innovation, reflects on his experience as a first-time attendee. 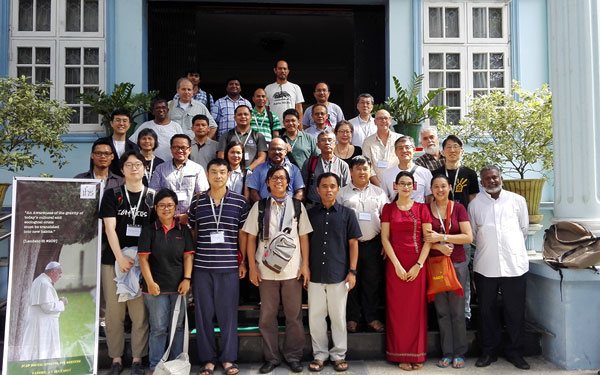 Attendees at JCAP’s 2017 Social Apostalate Gathering in Myanmar pose with a poster quoting Pope Francis: “An awareness of the gravity of today’s cultural and ecological crisis must be translated into new habits”.

Meeting annually provides an opportunity for awareness raising as well as sustaining the common commitment to social ministries. This year the meeting was held in Yangon, Myanmar, and the theme was ‘Reconciliation and Justice in Natural Resource Management’.

In his second encyclical letter, Laudato si: On Care for Our Common Home, Pope Francis critiques consumerism and irresponsible development. He laments environmental degradation and global warming, and calls all people of the world to take “swift and unified global action”.

The Myanmar Gathering offered the opportunity for us to reflect on the messages of Laudato si in a land that is experiencing internal conflicts linked directly to mining and the inequitable distribution of these national assets.

The Gathering’s 2017 theme was well summed up by a cartoon produced by Spectrum, one of four local organisations we visited.

Resource richness is both a gift and a burden 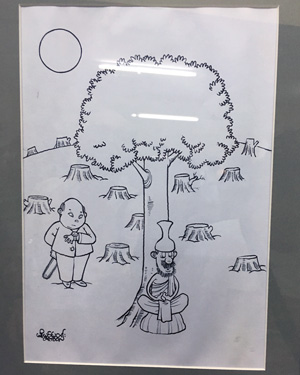 A cartoon by Spectrum satirises the gift and burden of Myanmar’s natural resources.

The conference was opened by Cardinal Charles Bo, Archbishop of Yangon. He spoke of how the resource richness of the country (including jade, gold, gas and teak) had been both a gift and source of conflict.

The Cardinal noted that the Myanmarese are “rich by a spiritual tradition – a people known all over for their graceful and peaceful living”. Yet this country was riven by conflict due to pillaging of natural resources and the unequal distribution of wealth.

He reiterated that in our Catholic tradition we always say, “If you want peace, work for justice”, and that this was the work of the Church in Myanmar.

Committing to action in the Asia-Pacific

Mark Raper SJ, President of JCAP Social Apostolate, encouraged delegates to commit to action from the gathering and to be focussed on follow-up and evaluation. With this in mind, delegates committed to inter-country agreements on action.

Australia’s commitments were to explore:

At a personal level, two things in particular resonated from the Gathering’s jam-packed four days: a presentation by Khon Ja, Coordinator of the Kachin Women’s Peace Network, entitled ‘Responses of the Civil Society’; and a call for practical engagement with the environment from Pedro Walpole SJ.

After outlining the struggles of her people and what we can learn about the needs of all ethnic groups, Khon Ja summarised what the Jesuits can do as, “Rights, rules and responsibilities.” She asked that we:

Khon Ja’s presentation followed the morning prayer, which I led with a reflection on NAIDOC week in Australia and the role Aboriginal and Torres Strait Islander peoples have played in the stewardship of the land. 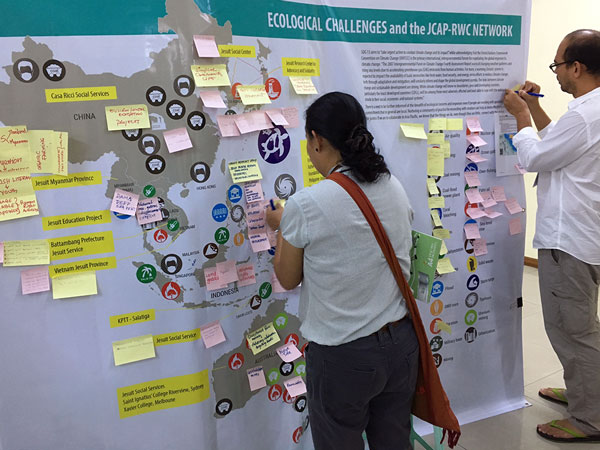 And finally, Pedro Walpole SJ highlighted that in reconciling with creation and “healing the broken world,” we can only talk with authenticity if we each take action in our personal and professional lives.

He asked each of us to identify what small steps we could take to live simpler, more sustainable lives and then to commit to these.

At Jesuit Social Services, we’ve been working on this for some time through our Practice Ecology tips. Our Practice Ecology tips help staff make a strong personal and communal commitment to ecology. They explore things like the relationship between place and identity, and suggest how to work in ways that are ecologically aware. I encourage readers of this blog to consider these tips.