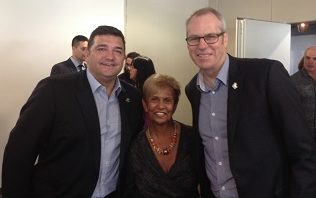 Leading club officials admitted past mistakes in front of a crowd that included all the players on Carlton’s senior playing list, former great Indigenous footballers like Syd Jackson, Jesuit Social Services staff, and members of the local Aboriginal community.

Aunty Pam’s father Doug Nicholls, who went onto become an Australian Rules legend playing for Fitzroy, was turned away by Carlton officials and players in the 1930s when he arrived at the club seeking a game.

‘The trainers refused to rub him down and some of the other players said he smelled. Both these incidents stuck with Dad all his life and he never forgot them,’ Aunty Pam told the crowd.

‘Carlton approached us to make amends and Dad would have accepted this as he was a very loving and forgiving person. Dad was a pastor and spent his life helping other people.’

This year’s AFL Indigenous round will be named in honour of Doug Nicholls, who was the first Aboriginal to be knighted by the Queen, and later became the first Indigenous Australia to hold a vice-regal office when he was made Governor of South Australia in 1976.

Carlton CEO Steven Trigg said it was right for Carlton to heal the rift after so many years.

He praised the current playing group, who had all voted to attend the ceremony despite having played in a bruising AFL match against Port Adelaide the day before.

The players later joined Aunty Pam and members of the Indigenous community on the playing field at Princes Park for a special smoking ceremony.

‘Dad would be just so honoured,’ Aunty Pam said.

‘I’m just hoping that after this he will be recognised by the AFL Hall of Fame. What footballer has a story like Dad’s, from the banks of the Murray River to Buckingham Palace to receive his knighthood, Governor of South Australia, third in the Brownlow Medal, and playing for his state?’

Aunty Pam, aged 73, is a Yorta Yorta Elder and a respected Elder of several Koori courts in Melbourne.

She is also a community member of the Adult Parole Board of Victoria.