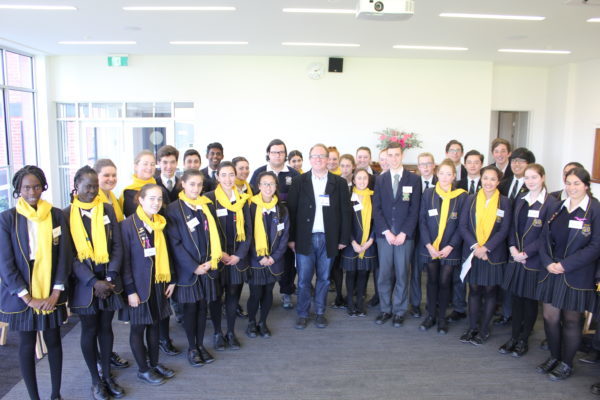 In the lead up to the Federal election, students from Parade College (Bundoora and Preston) as well as Santa Maria College (Northcote) met local candidates to discuss their views on policies surrounding people seeking asylum.

A group of 25 students from across both schools met with Australian Labor Party candidate and current Member for Batman, David Feeney, on Wednesday June 1.  Students asked pointed questions about Labor’s commitment to a more compassionate policy. Length of processing, offshore processing, and working with the UNHCR, were all topics of discussion between the students and their local member.

Students from Parade College presented Mr Feeney with a letter for Opposition Leader Bill Shorten outlining the school’s belief, based in a strong Catholic tradition, of a policy of compassion over cruelty for people seeking asylum. Likewise, students from Santa Maria College asked Mr Feeney to share a welcoming message for people seeking asylum on his Facebook page and possibly at his office.

This meeting is a part of a series that the Catholic Alliance for People Seeking Asylum (CAPSA), of which Jesuit Social Services takes a lead role, is facilitating between schools and local candidates. Students from Santa Maria will later meet Greens candidate for Batman, Alex Bhathal, whom students from Parade have already met with.

CAPSA hopes to build capacity for political engagement amongst students, future voters and leaders of this country, and show them that they have the power to affect political change.