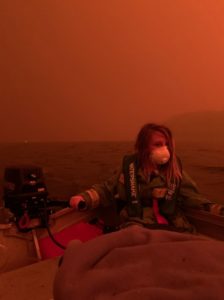 The recent fires were more than localised events. They made widespread changes to things that we take for granted: the light of the sun, transparency of the air, colour of beaches and the arrival of birds driven outside their normal habitat. The fires also affected social relationships. Communications in the form both of movement of people and goods and of electronic contact with families, medical centres and fire authorities, were disrupted. So was the commercial activity so important to the livelihood of coastal towns along the coast.

At the same time, however, the immediate response to the fires deepened people’s relationships to one another and to the natural world. People distant from the fires came to see their destructive violence, the heroism of those fighting the fires, the human reality of being stripped of home and family history. The ABC News channel became a gateway to empathy with people in their grief and courage. The fires also elicited a generous response as distant farmers brought feed to farms and a host of appeals began for donations to support people in their recovery. The fires also brought home to Australians the wider connections between the fires, high temperature and drought in which fire flourished, and the necessity to address climate change seriously and to deal with its effects.

That was the first phase. As the initial shock was handled, this breadth of vision and unity in responding to the fires has been put at risk. Things that belonged together were separated and presented as competitive. Responsibility for the fires was variously assigned to climate change, drought, arson, and the neglect of preventative burning of forests as if these were disconnected and unrelated.

When these things are seen in isolation and as competitive and not as part of a map whose complex hierarchy of relationships needs to be recognised, they will not address the factors that lead to fires. Preventative burning may help reduce the effects of future fires but it must be consistent with nurturing the diversity of flora and fauna. And, like all other partial steps, it will be affected by the effects of climate change and must be set within a comprehensive plan to address and minimise them. The location of houses, the allocation of water, protection of river systems, the support given to particular forms of farming, must all be reviewed in the light of the effects of climate change.

All this requires a reflective and universal view in a political world that thinks in terms of small actions to defend small territories. The Prime Minister’s emphasis on resilience and adaptation is not encouraging in that light. Both qualities are important, particularly in caring for people during a time of change. But as a response to the world revealed in the fires, they represent business as usual at a time when the ineffectuality of that business has been exposed.