Throughout 2016 and into 2017 a number of high-profile events across Australia have focused the spotlight on young people, crime and community safety.

In response to this, the new Northern Territory Government has announced $18 million of annual investments focused on diverting vulnerable young people away from the justice system. This includes funding of a Group Conferencing program in Darwin, which Jesuit Social Services will operate based on our successful model in Victoria.

The Federal Government has also confirmed it will ratify the Optional Protocol to the Convention Against Torture (OPCAT) by the end of 2017. This will ensure Australia’s prisons and
detention centres are monitored by independent inspecting bodies. We have long advocated for OPCAT to be ratified, as it is a valuable opportunity to improve oversight mechanisms in
these facilities.

While the Northern Territory Government has made positive investments into restorative justice approaches, the Victorian Government has introduced a range of tough measures and legislative changes to youth justice that we believe will not make our community safer – now or in the long term. The Victorian youth justice system is suffering the effects of years of neglect and there is a small group of young people repeatedly committing serious, violent offences. This must be tackled head on – but we must intervene wisely.

These decisions run counter to the principles behind an effective youth justice system, which should focus on diversion wherever possible, rehabilitation and protecting the best interests of children and young people while balancing the rights of victims. 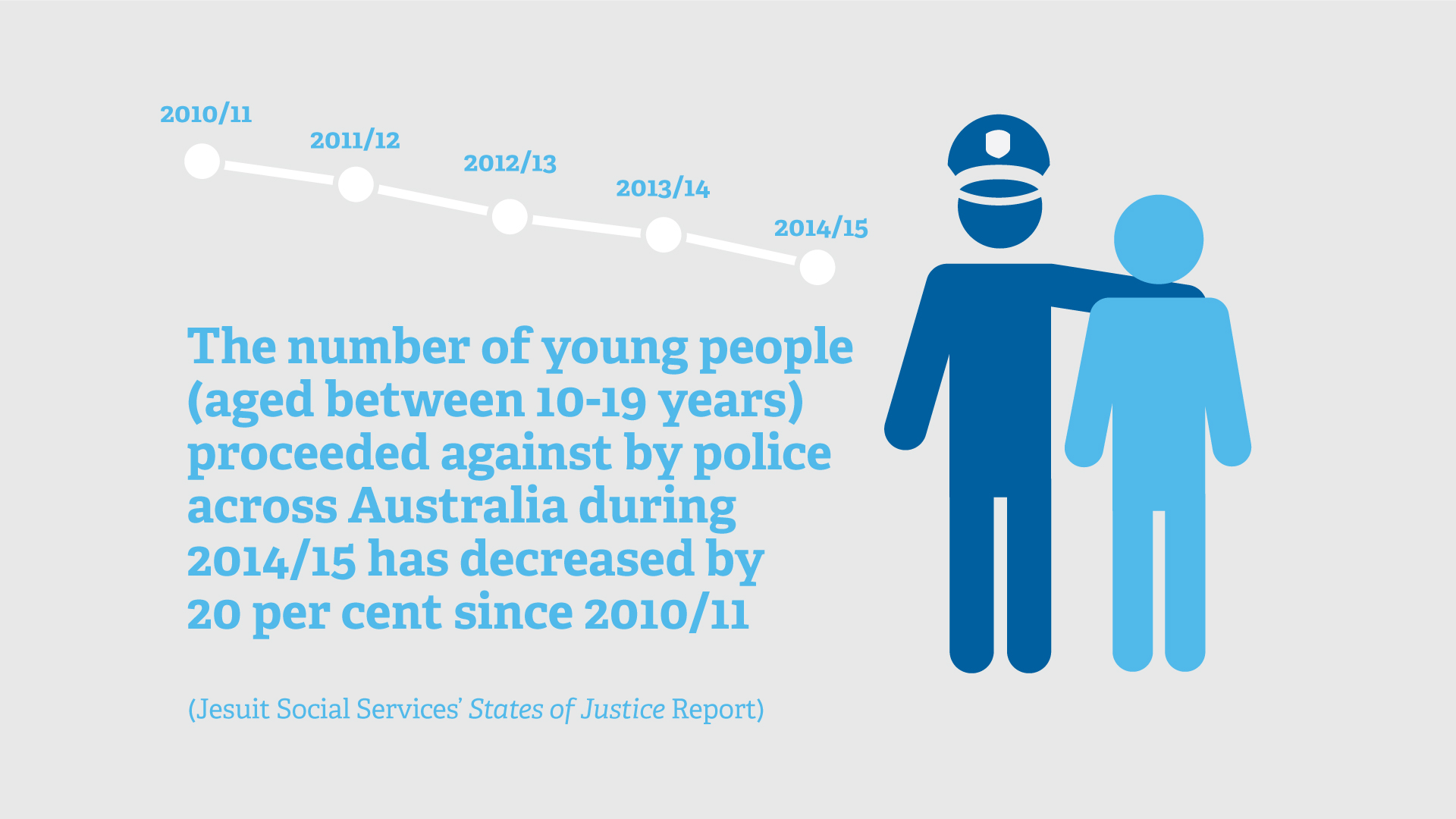 Young people involved with the justice system are among the most vulnerable in society. Many of these young people are dealing with multiple, complex issues such as childhood neglect, drug and alcohol problems and mental illness.

Recent media coverage has ignored these complex issues to instead fuel an assumption that youth crime is spiralling out of control across Australia. However, the reality is that both the numbers of youth offenders and young people under supervision (community or detention-based) are decreasing. As outlined in our States of Justice report, the number of youth offenders (aged 10–19 years) proceeded against by police in Australia during 2014/15 decreased by three per cent (or 2,223) to a total of 85,442, and by 20 per cent since 2010/11. In Victoria over the same period, the number of young offenders (aged 10–19) has decreased by 31 per cent.

In the context of shrill debates and disturbing punitive reforms in youth justice, Jesuit Social Services has taken a strong leadership role in advocating for balanced, clear-headed and evidence-based responses.

We have called for a focus on addressing the underlying drivers of crime (disadvantage, low education, unemployment) and investing in prevention and early intervention (especially early childhood services).

We believe there is a place for custody but that must always be used as a last resort, with the end goal being rehabilitation and successful reintegration into the community as a contributing citizen.