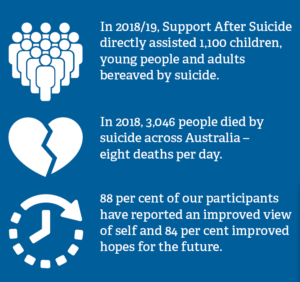 The current state and federal focus on mental health offers a critical generational opportunity to drive systemic and cultural change. Last year, the Victorian Government initiated a Royal Commission into Victoria’s Mental Health System and the Australian Government’s Productivity Commission is undertaking an inquiry into the Social and Economic Benefits of Improving Mental Health.

For an effective reform path to become a reality, we must take a broad view that encompasses a holistic understanding of the social determinants of, and effective responses to, mental ill-health.

Suicide, for example, is a particular issue that impacts many Australians. Figures from the Australian Bureau of Statistics Causes of Death, Australia 2018 are stark: 3,046 people died by suicide across Australia – eight deaths per day. Males continue to be three times more likely to die by suicide than females. Suicide accounts for 1.9% of all deaths in Australia.

The Productivity Commission’s draft report notes that “There is no single measure that would prevent suicides but reducing known risks (for example, through follow-up of people after a suicide attempt) and becoming more systematic in prevention activity are ways forward.”

We know that the experience of bereavement after suicide is complex and prolonged and people who don’t receive the help they need from specialists in the postvention field often have mental health issues in the long-term. It is critical to recognise the risk of suicide amongst those who are bereaved by suicide. The reality is that some of our participants present as suicidal. However, we know from our experience that postvention support delivered by experienced practitioners reduces this risk. Through Support After Suicide, we work closely with people to address psychological distress and trauma, promote general health and well-being, and encourage social and community engagement. With the right support we can help make a difference – 88 per cent of our participants have reported an improved view of self and 84 per cent improved hopes for the future.

In our advocacy we call on governments to develop a comprehensive suite of initiatives to drive down rates of suicide and improve mental health support for all members of the community. Understanding this is a long-term goal, we also call on government to deliver secure, long-term funding for postvention, early intervention services for suicide bereavement, and increase access to suicide bereavement services for regional and rural areas. We also call for funding for a dedicated research stream to develop an evidence base on the impact of suicide and the effectiveness of postvention services in reducing risk.

We must take stock now, review what works, and be bold in creating a new blueprint that can help everyone reach their potential.