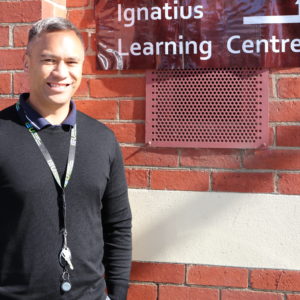 John Andrew is Principal of our new Ignatius Learning Centre

When John Andrew left his job teaching in a mainstream secondary school to join the team at Parkville College – which provides education to young people incarcerated in Victoria’s youth justice system – some of his colleagues “thought I was crazy to go and teach in a prison”.

But for John, now Principal at Jesuit Social Services’ Ignatius Learning Centre, it was a natural progression.

“When I was young I had a lot of cousins who were involved in the youth justice system and being quite close to them I wondered ‘how did this happen?’ but I never judged them and I always saw the best in them,” he says.

The Ignatius Learning Centre, based at Jesuit Social Services’ Central office in Richmond, is a Catholic Specialist Secondary School that supports boys aged 15 to 17 who are disengaged or at risk of disengaging with school and who have had contact with the youth justice system.

The school opened its doors in February this year and currently has 15 students, with John hoping the number will increase to 30 in coming months.

Students work towards completing the Victorian Certificate of Applied Learning (VCAL) and have the opportunity to engage with Jesuit Social Services’ suite of programs including Artful Dodgers Studios and the Ecological Justice Hub.

John says that, in addition to the classroom learning, students benefit from the supportive environment, ability to maintain routines and social interaction.

“That’s one of the most encouraging things so far. Some of our kids have been with the school since we opened and missed less than a handful of days along the way. Initially they said, ‘we might come a couple of days a week’ and now they’re here every day. It is very encouraging,” he says.

“We often reflect at the end of class, and at the end of the week we do a reflection on the school week. Recently, I said to one student that he has attended all five days that week and I wanted to acknowledge it, after not attending school at all last year.

“At that point he said, ‘it’s because you guys are engaging, and you have high expectations of me’ which we were blown away by. You can see the trust within the school, the staff and the students and the positive culture we are creating.”