Senior leaders at Jesuit Social Services recently embarked on a study trip to New Zealand to learn more about their approaches to dealing with young people and adults who have contact with the criminal justice system. 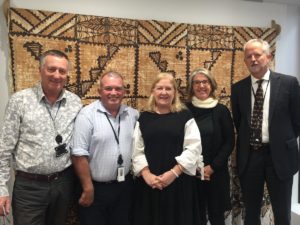 Over the past decade youth offending across Australia has decreased considerably, yet prison numbers continue to rise, with many of these young people on remand (i.e. not yet sentenced). At Jesuit Social Services, we believe that an effective youth justice system is one that holds young people accountable for their actions while working to rehabilitate and re-socialise them, and ultimately prevent re-offending.

In 2017, we undertook a study tour to parts of Europe, the US and the UK to look outside our borders for solutions to youth justice problems in Australia. This year, we have once again looked outside our borders, this time to New Zealand.

New Zealand faces many of the same challenges we do here in Australia, and certainly does not have a flawless system. However, what they do have is a desire for reform. We were heartened to hear that the New Zealand Government had committed to reducing the prison population by 30 per cent over 15 years; a vision that is shared across all levels of leadership.

Restorative justice is the principal response to young people when they offend; which is not the case in Australia. Family Group Conferencing is the main restorative approach in New Zealand and it encourages young people to take responsibility for their actions, recognise the harm they caused and work to repair that harm through consultations with the community and their family.

What we also saw was the importance placed on spirituality and culture in the justice system. Maori culture is embedded in youth justice processes. There is connection to tradition, ceremony, land and community. This was most clearly articulated in the function and practice of the Rangatahi (Maori) and Pasifika Courts. These courts function as traditional youth courts but are held on Marae (Maori meetings grounds), follow Maori or Pasifika cultural processes and involve the families and communities of the young person. Similar to the Koori courts that we have in Victoria and New South Wales, we found that these courts place the young person at the centre of the process, and create strong links to culture and community.

The youth justice facilities that we visited had a strong focus on education, with one classroom and two teachers per unit of approximately eight young people. Separate skills centres provided training in cooking, carving, music and other activities. These visits reaffirmed our findings from our 2017 Justice Solutions tour: small, home-like facilities that are close to communities best support young people. Staff at these youth justice centres were surprised to hear that handcuffs, batons, capsicum spray, dogs and/or guns have been used at youth detention facilities in Australia. These are not used in NZ. Through relationship with the young person, including using de-escalation techniques, potential risk events are managed.

We spent a day at Auckland’s Alcohol and Other Drug Court, which also prioritised strong cultural practices, from the use of language to the symbols around the court room and the active voice of Maori elders, through to the closing prayer and song.

We observed that close attention was paid to the details of each person’s life as part of the court process. The judge, elders, police, lawyers and caseworkers all participated – bringing insights, direct knowledge, experience, legal and moral considerations to bear.

This was justice at its best – holding to account, encouraging, connecting with family and community, extending the hand of personal care and hope.

Like all other jurisdictions, there is scope for improvement in New Zealand’s justice systems.

However the strong leadership shown by New Zealand’s Government – and a commitment to reduce the prison population – should be commended.

So too should the Government’s focus on improving mental health and other vital services to prevent crime from occurring in the first place.

A key lesson Australia can learn from New Zealand is the shared political commitment to positive reform and belief that all young people are worth a second chance.