A new audit of Ravenhall Prison, tabled yesterday by the Victorian Auditor-General’s Office, shows that an over-crowded prison population is limiting people’s access to vital programs and services to help them address the underlying issues behind their offending. We need greater access to data and transparency across the board to assess whether prison operators are meeting their contractual obligations, writes Jesuit Social Services’ Media Relations Manager KATHRYN KERNOHAN.

The primary goal of any effective prison system should be rehabilitation – that is, recognizing that the vast majority of prisoners will exit the system one day, and ensuring that they do so better off than when they entered.

A critical way to measure this is through recidivism data, which demonstrates the percentage of people who return to prison after exiting. 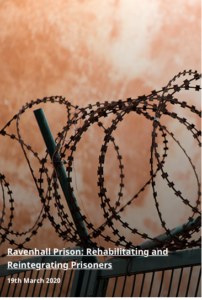 Currently, across the board in Victoria, that number is at 43 per cent – meaning close to half of all people who leave prison return within two years.

Fundamentally, prison should only ever be used as a last resort and where community safety is threatened. While we need to have a broader conversation about how to assess the effectiveness of the prison system, recidivism data is currently one of the key methods we use for tracking post-prison outcomes.

So what happens if gaps and flaws in performance and evaluation frameworks – due in part to broader systemic issues – meant that this data isn’t readily available?

In a nutshell, it means we don’t know whether we are in fact addressing the underlying causes of their offending behavior, supporting people to turn their lives around and prevent re-offending.

It means we don’t know whether is the justice system is achieving what should always be a primary focus.

That’s the situation surrounding Victoria’s Ravenhall Prison, as outlined in an audit tabled yesterday by the Victorian Auditor-General’s Office (VAGO).

Ravenhall is privately operated by GEO Group, which currently operate five prisons across the country. That number will soon be four, as control of NSW’s Parklea Correctional Centre will be taken away from GEO in April 2020 following a string of serious incidents.

Thirty-seven per cent of Victoria’s adult prison population is held in privately owned and operated facilities – the highest by far across Australia and more than almost anywhere else in the world.

Ravenhall is Victoria’s newest prison and began operations in late November 2017. On its opening, the Victorian Government announced that GEO’s contract “contains targets for reducing recidivism and the delivery of support programs for prisoners released from custody.”

The prison was initially designed to accommodate 1,000 sentenced male prisoners. Yet less than two and a half years after opening, Ravenhall’s capacity has already been expanded to 1,300 andpeople on remand (meaning they are yet to be convicted of a crime) are also housed at the prison.

In fact, the VAGO report found that remand prisoners currently make up more than half [52 per cent] of Ravenhall’s population and, crucially, that “as most of Ravenhall’s prisoners are remand or short-stay, many are ineligible to participate in its criminogenic programs, which focus on reducing reoffending.”

An over-crowded prison population is straining the system , and limiting people’s access to vital programs and services to help them address the underlying issues behind their offending.

It also means that we don’t know whether Ravenhall is succeeding – or otherwise – in achieving its targets around reducing recidivism.

As Auditor-General Andrew Greaves said, “for this reason, GEO’s original model is unlikely to be as effective at reducing reoffending for its current prison population.

“This is a significant missed opportunity for the state to learn about and improve prisoner rehabilitation and reintegration.”

Jesuit Social Services has a long-standing interest in the use of private prisons, both in Australia and globally.

We called for data on private prison contracts and performance outcomes to be publicly available and for greater transparency around these outcomes, including those of private prisons, so that the merits or otherwise of privatization can be assessed.

The VAGO report is a sobering reminder that without adequate data, we are unsure whether prison operators are meeting their contractual obligations.

And that is not good news for people who have contact with the prison system, or for the broader community.