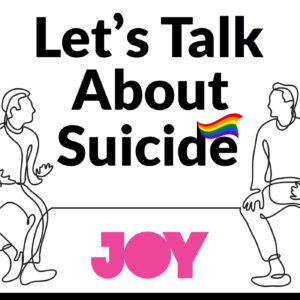 A new podcast, co-produced by our Support After Suicide program, Joy 94.9 and Switchboard Victoria, provides support, conversation and comfort to people affected by suicide.

Let’s Talk about Suicide, a 13-episode podcast launched in October, has a particular emphasis on suicide bereavement in the LGBTIQA+ communities.

Research shows that young LGBTI people aged 16 to 27 are five times more likely to attempt suicide in their lifetime compared to the general population.

While the ultimate goal must be to significantly reduce the number of suicides in the community, postvention services that support those left behind after the suicide of a loved one are critically important to help navigate complex emotions and to reduce the risk of further suicide.

Four current and former participants of Support After Suicide share their experiences of being bereaved by suicide with the series, which is separated into topics such as ‘understanding guilt,’ ‘preparing for special occasions’ and ‘supporting a person who has lost someone to suicide.’

“We were extremely close, [it was] one of the closest relationships in my life. The day Ingrid suicided, I found Ingrid… she spent three days in hospital before her life support was turned off. It was a really tricky time for everyone involved and I went into a state of deep shock and trauma,” she says.

“Because she can never return to us, I know I’ll have to deal with the loss for the rest of my life. I think I am aware that she’s always gone and that it’s always going to be sad and hard.

“The effect it has on your life, and how changed my life is, I found that really tricky. I know there is a lot of stigma around suicide, the more people that speak out and break that taboo is hugely important.”

Support After Suicide Manager Louise Flynn, who has more than 25 years of experience as a psychologist, provides expert advice throughout the series.

For more information about Support After Suicide, visit: www.supportaftersuicide.org.au