Palm Sunday invites us to consider the price we put on humanity and compassion, writes ANDY HAMILTON SJ. 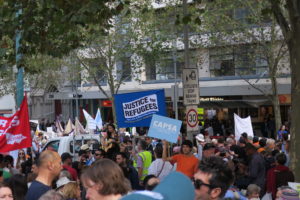 Participants in the 2019 Walk for Justice for Refugees rally.

This year we again celebrate Palm Sunday in the shadow of Coronavirus. As in previous years Palm Sunday is a day for remembering refugees. Marches take place through many cities and towns, their banners recalling the branches waved as Jesus entered Jerusalem in the Gospel story, and the fate of so many people who have sought asylum echoing the end of Jesus’ life journey on Good Friday.

March is also a year since COVID-19 was declared to be a pandemic. The Palm Sunday march, like other large events, was cancelled. At Jesuit Social Services we grieved the loss of opportunity to walk under our Jesuit Social Services and Catholic Alliance for People Seeking Asylum banners in solidarity with refugees. The uncertainty caused by the virus, however, has also brought home to us the experience of refugees, which echo Jesus’ journey from Ash Wednesday to Good Friday, from the memory of ordinary life with its triumphs and disappointments, its meetings in the streets, its friendships and rivalries, and all its predictability.

It takes us also to their later time of flight, perhaps to arrest, to pursuit, and to the living death of the loss of freedom, of dignity and of sharing in the joy of shared enterprises and relationships. It snatches us from the tapestry of the ordinary relationships to the broken thread of isolated lives.

In Australia the lives of people who have sought protection mirror Jesus’ confinement in Jerusalem at the end of the week that began so promisingly on Palm Sunday. For him that was a relatively short time of lost freedom, of concealment behind thick walls, of casual brutality, of sudden invisibility, of arraignment before judges who had already decided to have him killed, from being a human agent to being a cipher in other people’s games.

The life of people who have sought protection in Australia is best seen through the eyes of people who became physically and mentally ill through years of confinement on Nauru and Manus Island. Under legislation forced on the Government they were brought to Australia for treatment. Many were held in city hotels, untreated and confined. They could look out on the city streets, on people living the unconfined lives which they had sought for themselves and their families, look out on all the casual conversations, the hurry to work each morning and return home each evening, and the daily activities that build a nation. And like animals in a zoo, they could see the occasional person looking in at them, kept alive but deprived of life. Many have been recently released from these places of mental torture to an unsupported life in the community, not out of compassion but because they would cost the government less. Many remain in confinement.

This image of these refugees belongs together with the familiar story of Palm Sunday and the week that it introduced. It represents a man who enters the city as king and judge, and later is betrayed for a few coins, mocked and judged. But his suffering and God’s raising him from the dead ultimately judge those who judged him.

The people who look to us for protection have similarly been judged, put on display as deterrence, and their lives measured by their financial costs. They look out on the Australians who have done this to them and ask what we value, what price we put on humanity and compassion, what values we have. As they look out, they invite us to look inwards and to reflect on our lives and our nation.