New report gives a voice to those left behind after suicide 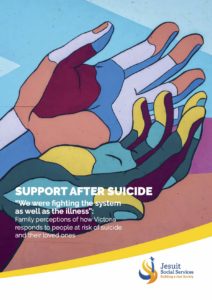 A recent report published by Jesuit Social Services’ Support After Suicide program shows, through the experience of people bereaved by the suicide of a loved one, that Victoria’s mental health system was under significant stress even before the impact of the COVID-19 pandemic.

“Of the 142 people we surveyed, almost three quarters (70 per cent) told us their loved one who died had previously sought help from the mental health system,” says Dr Louise Flynn, Manager of Support After Suicide.

“Almost half were known to have attempted suicide in the past, and 79 per cent of family members said they felt there were barriers to them accessing information or help in caring for their loved one.

“These serious gaps identified by our participants mean our mental health system is failing to be the strong, effective system we need, particularly at a time when we expect the pressures and demands on the system to continue to increase.”

Caroline, one of our program participants, whose son suicided at age 17 (not their real names), is one of several people to share their experiences with the mental health system in the report.

“The night before he died, I didn’t want him discharged. I told the private hospital psychiatrist I was afraid something terrible would happen. She told me I had to take him, that I was responsible for him. I was really worried, upset. And then something terrible did happen. He died the day I picked him up from hospital,” she says.

“I don’t think I ever felt confident about his management–apart from one psychiatrist. There were individuals within the system who supported David. But I just felt like the system was floundering.

“The system needs to include family members, especially in younger people. We are there because we want to help–not to be shut out and then told to look after him with no information about how to do it.”

The report includes a range of key recommendations such as an increase in training, resources and targeted support for health practitioners to assist people at risk of suicide, and a review of how confidentiality practices and protocols limit the information and guidance given to families around appropriate care.

It also calls for secure, long-term funding for post-suicide programs such as Support After Suicide, which provides services including counselling, group work and peer support to those left behind after a loved one has ended their life. In 2019, Support After Suicide helped more than 1,200 adults, young people and children bereaved by suicide.

“We know that family members of people who have taken their lives experience feelings of grief, anger and sadness and are at increased risk of suicide themselves, which is why it is incredibly important that people can access services like ours during times of need,” says Dr Flynn. To read the report, visit: bit.ly/3epHXz8