Ahead of Sorry Day (May 26) and National Reconciliation Week (May 27 – June 3), ANDY HAMILTON SJ writes that reconciliation begins by recognising the human reality of the relationships between Indigenous people and non-indigenous Australians and the history of those relationships. 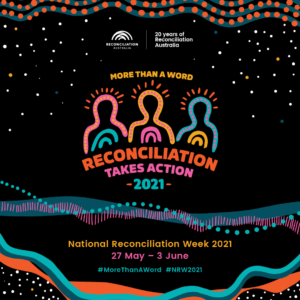 The theme for 2021 is ‘More than just a word’. It points to the ever-present danger that words like reconciliation which express large hopes and commitments will turn out to be no more than words. Such big words occur everywhere in documents and in speeches, but rarely command actions, policies or budgets. They are an art-form constantly drawn on to give an appearance of good will and commitment which will later prove to be illusory.

Situations in which one group of people has been discriminated against by another, and discrimination is written into the unnoticed workings of society, demand more than just a word. They demand just words. Reconciliation needs to be embodied in actions, in change of heart, in changed public attitudes, and in the resolve to meet demanding challenges instead of denying or neglecting them. Reconciliation demands change.

The urgency of reconciliation has been underlined in the last month by the death of four Indigenous persons in prison. Such deaths reflect the disproportionate incarceration of Indigenous people in Australia, little changed since a Royal Commission over thirty years ago. The Royal Commission considered the many facets of the life of Indigenous peoples that contributed to their imprisonment and death in prison. Many of these can be traced to the dispossession of their ancestors and their subsequent treatment by the people who drove them off their lands, took away their children and scorned their culture. Their reality has been one of being discriminated against.

More recently, the Northern Territory Government passed a number of regressive youth justice legislative changes, which will have a disproportionate impact on Aboriginal and Torres Strait Islander children who make up the vast majority of children who have contact with the Territory’s youth justice system.

Reconciliation must be first made with reality. It involves recognising the human reality of the relationships between Indigenous people and those who supplanted them and the history of those relationships. To recognise human reality, we must first be interested in the human beings involved.

The path towards reconciliation begins with curiosity and wonder at our Indigenous brothers and sisters, their vision of the world and what they value. Curiosity then leads us to interest in their stories. These inevitably take us back to the invasion by representatives of the European culture and its effects both on Indigenous culture and on the people who inherited it. We are led to recognise the racist attitudes, discriminatory laws, exploitation and abusive administration that have contributed to the social ills that have afflicted Indigenous people. These include their disproportionate ill health, unequal incarceration, and limited access to educational opportunity and work.

Like many Australians we at Jesuit Social Services have committed ourselves to the Indigenous Australians among the people whom we serve and to the path of discovery and solidarity that leads to reconciliation. We know that we stand at the beginning of that path.

While it is built on the shared recognition of these realities, reconciliation can only take place when Indigenous and non-Indigenous Australians meet as equals and address the challenges that as a nation we face in building a just society. This will entail removing the obstacles that attitudes and practices based on inequality have created, and supporting the initiatives within Indigenous communities and the institutional change that will lead to real reconciliation. Reconciliation will then be more than a word.