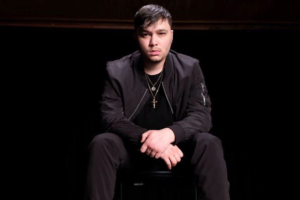 Congratulations to Just Voices Speakers Program participant Jonathan ‘Caution’ Binge, who is one of the winners at the 2020 National Indigenous Story Awards.

The Indigenous Story Project “aims to provide an opportunity to gather, (re)generate, and host stories, and thus knowledges, through spoken word, in music, in film, in visual arts, writing, and all multimedia forms.”

Caution is a proud Gamilaraay, Dunghutti and Gumbaynggirr man and a writer, poet and hiphop performer.

He won the award for his rap “Mum” which was recorded at the Artful Dodgers Studios by producer Jesse Sullivan.

The young rapper said he “found his voice” when he discovered hip hop music.

From his early teens he has gained the respect and admiration of all who hear his deftness of language, depth of wisdom and undeniable honesty, technique and linguistic dominance behind the microphone.

Barely into his 20’s, Caution has a solid half decade of performance behind him, supporting the likes of Uncle Kutcha Edwards, Motley and Ninah Nicole, Philly, and P Smurf as well as being a part of Melbourne’s formidable Nine2Five records.

He has also performed at many conferences, workshops and presentations for Jesuit Social Services.

His own artistic career aside, Caution says he sees music, hip hop and art, not as a vehicle to material gain but as a tool of empowerment for those who have no voice, whose stories have been disregarded and whose language may be too polite to understand the subtlety of what it means to grow up indigenous and having to interact with suburban Australia.

A regular contributor, mentor and supporter of young hip hop artists across the community arts scene in Victoria, Caution gave name to New Hope, a program designed to promote youth hip hop and has been a regular contributor to Dig Deep and the Worth A Second Chance campaign.

As well as being a Just Voices presenter, Caution currently works with the Commission for Children and Young People.