Help us to give young people a second chance 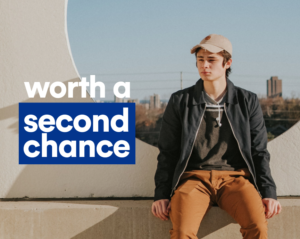 Our #WorthASecondChance campaign was launched in July 2018 as a way to engage the public in joining with us to call for the youth justice system our community deserves.

At the time, youth justice in Victoria was at a crossroad.

Victoria had once been a leader in its approach to youth justice but after years of neglect, run down facilities and an underinvestment in staff by both major political parties, the system was showing significant cracks. The Government and Opposition were promoting ‘tough on crime’ policies that were proven by local and international evidence to be ineffective or harmful. Something needed to change.

Worth a Second Chance engages the community through the voices of the young people at the centre of this issue and by encouraging peer-to-peer discussion. Simultaneously, Jesuit Social Services continues to advocate for the implementation of proven programs for vulnerable children who are at risk of entering the youth justice system and restorative justice for those already within the system.

One major change both Worth a Second Chance and Jesuit Social Services are advocating for, is to raise the age of criminal responsibility from 10 years old to at least 14.

Right now, in every state and territory in Australia, a child aged 10 can be charged and sent to prison. This flies in the face of evidence that demonstrates a child aged 10 years old cannot form criminal intent, and advice from the UN that the age of criminal responsibility should be 14 years of age at the very youngest.

Jesuit Social Services has been campaigning for over a decade to place this on the national agenda and we were encouraged that a process was underway at the nationally convened Council of Attorneys-General to address the issue.

However, we were disappointed to hear the Federal Government’s recent decision to step back from a coordinated national approach to this important issue and to instead refer responsibility for further action back to the states and territories. The failure to include raising the age as a national agenda item will delay progress on this issue and condemn more vulnerable children to unnecessary detention.

“We are deeply disappointed that, despite a wealth of evidence from Australia and abroad showing that children under 14 years do not possess the neurological maturity to form criminal intent, the Council of Attorneys-General has ultimately handballed responsibility for this issue back to State and Territory Governments,” says Jesuit Social Services CEO Julie Edwards.

There are some signs of hope around the country. The Northern Territory has previously committed to accept the recommendation of the 2017 Royal Commission into the Protection and Detention of Children and raise the age of criminal responsibility to 12 years old with no child under 14 years old to be held in prison, while the ACT government has also committed to a process that will see the age raised to 14. We will continue to work with State and Territory Governments to see that this important legislative change is made.