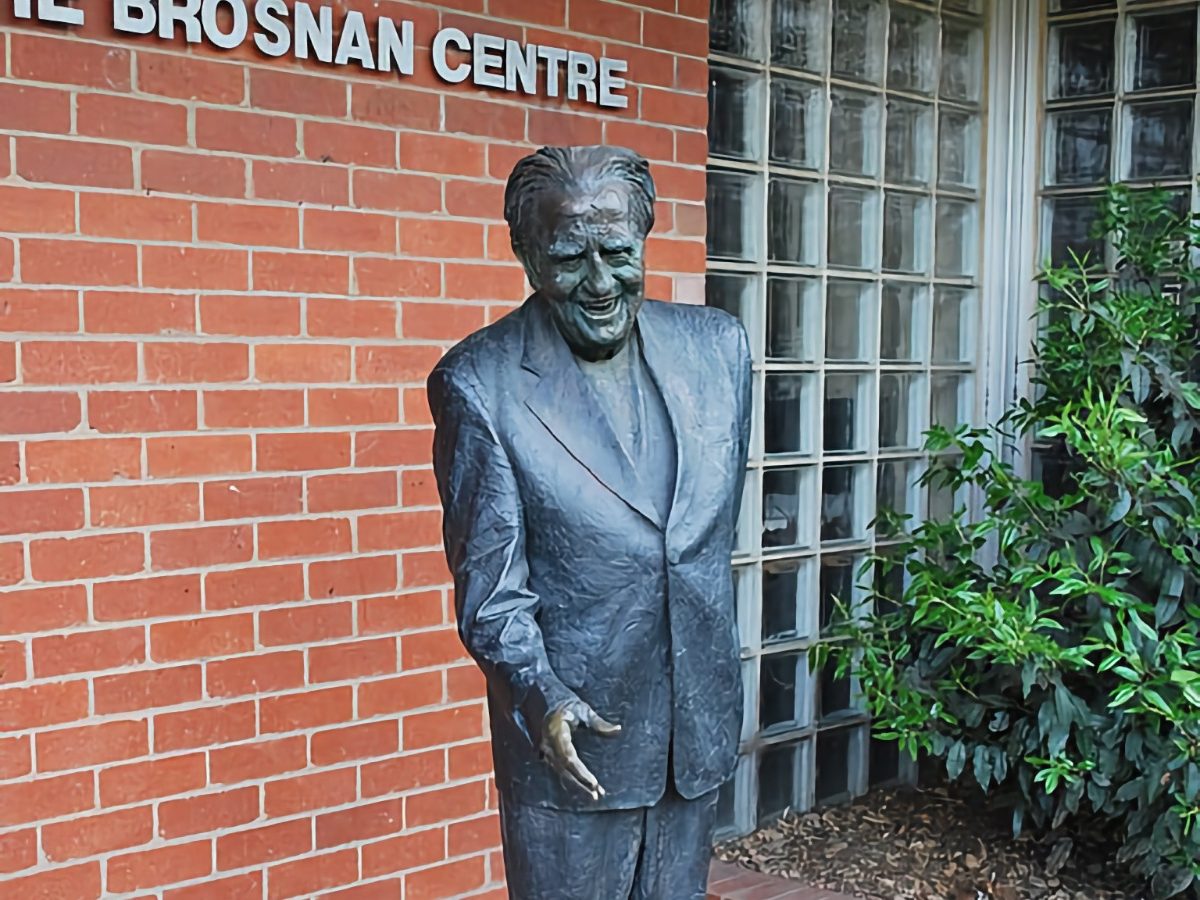 Father John Brosnan was a Chaplain at Coburg’s Pentridge prison for 30 years.

Brunswick locals and visitors to Jesuit Social Services’ Brosnan Centre are probably familiar with the smiling statue on Dawson Street, but how many know the story behind the figure?

Father John Brosnan was a Chaplain at Coburg’s Pentridge prison for 30 years. In 1977, he helped found the Brosnan Centre, which runs programs that help young people who’ve been to prison cope with life after their release.

Father Brosnan is also known for his campaign to save Ronald Ryan, the last man in Australia to die by capital punishment in 1967. Though his campaign failed, Brosnan’s advocacy helped end the death penalty in Australia.

Timm is a Brunswick local who often walks by the Father Brosnan statue at the entrance of the Brosnan Centre. “If I ever needed some luck or a pick me up, like many locals I would shake his hand or maybe rub the shamrock for luck.” Timm learned about Father Brosnan in his time with the Brunswick Rotary Club. “The locals spoke so highly of him you had no choice but to learn of his legacy.”

Towards the end of 2021 Timm noticed the Brosnan statue had been graffitied. He knew the team at the Brosnan Centre had likely been working from home under COVID-19 restrictions, so he contacted Jesuit Social Services offering to clean it up.

Timm — who works with metal — spent several hours over two nights cleaning the statue with soap, acetone and vinegar, and an electric toothbrush. “I gave the old fella a bath, which looked very weird and I got a few laughs… lots of people stopped to say thanks, and that they had also noticed what happened to the statue.”

Timm says he had conversations with many passersby — some saying they regularly stop to shake Brosnan’s hand, others sharing their memories of the man. One woman recalled that Father Brosnan had helped her father when he was down to his last penny.

Speaking about Father Brosnan’s legacy, Timm says, “Being a voice for all those who didn’t have a voice is [his] biggest legacy. Father Brosnan continued to do his job even when he didn’t agree entirely with the establishment but still believed he could make a difference. I think this is an admirable trait. Stories of him paying for school fees for kids of parents at Pentridge speak volumes of him seeing a problem and trying to keep some normality in a crazy situation, or even better, trying to break the cycle.”

Daniel Clements, who manages justice programs at the Brosnan Centre, says the Brunswick team are grateful for Timm’s generous offer and hard work cleaning the statue: “It’s heartening to see Brunswick locals like Timm continue to remember and honour Father Brosnan. Father Brosnan’s advocacy for young people who’ve had contact with the justice system and his determination to break the cycle of disadvantage is still central to our day to day work at Jesuit Social Services.”

There are three things needed by people upon their release from prison: A place to live that is decent. A job they can handle. And friendship, and the hardest to provide is friendship.

The Brosnan Centre continues to run many programs which support young people. Among them are the Youth Justice Community Support Service, which provides intensive support to 10-21 year olds who’ve had contact with the justice system, and the Youth Justice Group Conferencing program, which creates dialogue between young people who have offended and those who have been impacted by their behaviour, including victims and police.

Just a few kilometres down the road from the statue, alongside Coburg Lake Reserve, on Wurundjeri Country, visitors can walk through the redeveloped Pentridge prison where Brosnan worked. The prison was infamous for its inhumane living conditions and use of violent punishment. Now, the area is home to a shopping centre and apartments, but the towering bluestone walls are a reminder of the prison’s history and why the continued work of Jesuit Social Services’ Brosnan Centre is so crucial.