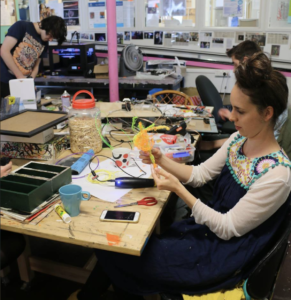 Nyssa says she was “thrilled and humbled” to receive her scholarship.

“The scholarship will assist me to fully immerse myself in my studies during the final year of my undergraduate, without the burden of financial stress. The funds will go towards my living expenses and health care, as well as allowing the purchase of equipment and materials for my artistic endeavours,” she said.

Nyssa was born and raised on Gunditjmara country in the small Victorian coastal township of Portland.

“At age 18 I moved to Melbourne, however, the next few years of my life were rocky to say the least,” she said.

“Making art allowed me to navigate the chaos of life and one of my greatest supports during this time was The Artful Dodgers Studios, which is an open access art and music studio for youth, and a safe space where I could connect, create and reflect.”

Nyssa said at the Artful Dodgers in 2013 she was invited to participate in the Rudder Exchange Visual Arts Mentoring Partnership, alongside mentor Fergus Binns.

“Fergus helped demystify the art world that had previously seemed beyond my access. At the Rudder Partnership’s group exhibition Synergism, 2013, I was so nervous that I hid between a wall and a curtain for half of the opening,” said Nyssa.

“I was also involved in numerous other projects through The Artful Dodgers Studios that year such as the Gertrude St Projection Festival and collaborating with Artful Dodgers mentor Kate Gecko at the Light in Winter Festival at Federation Square.

“In 2015, with the support of Artful Dodgers Studios, I had the privilege of holding my first solo exhibition, Grain of Salt, at Little Woods Gallery. This experience, and the positive reception of the exhibition, greatly increased my confidence in my artistic practice.”

In 2017 Nyssa’s sculptural installation Messy Pellagic Layers was a part of the group exhibition Beached Veranda ?in in Port Fairy. The materials for this kinetic sculpture were collected from the beaches of Portland.

“I spent the next few years working on my health and making ends meet as a Nanny, and at the end of 2018, I plucked up the courage to apply for art school. Studying at the VCA has been a long-term dream of mine. I am so grateful to be a part of this wonderful creative community.

“I am feeling very excited about my upcoming artistic pursuits. Thank you Artful Dodgers and Jesuit Social Services for your encouragement and support.”