Andy Hamilton SJ on the meaning of charity 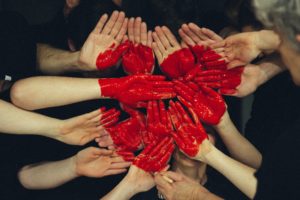 The International Day of Charity (5 September 2020) encourages us to be generous in financially supporting programs to help people who are disadvantaged. This support is particularly needed as we struggle to respond to coronavirus. In Australia many people have lost employment, contracted debt, risk losing housing, and are dependent on charitable organisations for food and support. The effect on already vulnerable people in other parts of the world is even more catastrophic. They call on our generosity.

Charity, however, has a much richer meaning than giving money. It has to do with love.  Charity sees other people as our brothers and sisters who command our respect and generosity, and who invite us to respond generously to them in their need.  It is the opposite of selfishness, which makes us see other people and nations as enemies or rivals, put our own interests first, and grudge others any suggestions that we should help them.

During the time of coronavirus both charity and selfishness have been on display.  An effective response to the virus has depended on people’s generosity. In order to prevent the virus from spreading they have had to sacrifice their own prosperity and freedom for the good of the whole community, and especially for people who are most vulnerable. As a society, too, we have been blessed by the charity of health workers and nursing home staff who have risked their own health in their exposure to the virus. They have been an inspiration to us. We have also been encouraged by leaders who have been able to set aside political rivalries to lead their governments in a time of uncertainty.

This generosity and care, however, have made examples of selfishness and thoughtlessness stand out. Many people have failed to isolate, wear masks, observe social distancing, or to isolate when instructed. This conduct is lacking in charity. Equally destructive, but perhaps less recognised, has been a lack of intellectual charity in people who are concerned only for their own interests in the policies they propose. They set their own judgment over that of people with expertise, and support the economic interests of their own groups at the expense of the whole community. Charity leads us to want to be in it together and to find satisfaction in generosity that is shared. Selfishness resents being in it together and wants to impose its own way and serve its own interests. It divides and demoralises society.  In a good society its compass is always set towards charity.

Not-for-profit organisations witness to the importance of charity. Many, including Jesuit Social Services, inherit a faith-based tradition. The Christian tradition is built on a story of a God who loves people enough to share their lives and die with and for them. It commits its followers to a self-sacrificing life. The commitment to a community built on generosity which inspired schools and hospitals and other initiatives for people who were neglected, and which continues to be expressed in works for the most disadvantaged.

Charity builds community, and charities usually rely on the charity of ordinary people to carry on their work for people who are doing it hard. They need to work hard to continue their service. But as we celebrate the International Day of Charity we honour especially small donors as well as large philanthropists, and we commit ourselves to encourage our governments to build their overseas programs on charity and not on self-interest.

For more information on the International Day of Charity, visit https://www.un.org/en/observances/charity-day