In his article for Anti-Poverty Week, ANDY HAMILTON SJ writes that the existence of poverty in our society is a measure of the value we place on human beings and their lives.

We should not need a special day to remind us to eradicate poverty in Australia. If we really wanted to achieve this we would have to dedicate only a small fraction of the money and ingenuity we spend on our armed forces and on subsidising people and companies already 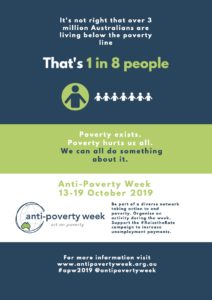 privileged. As a society, however, we are ambivalent.

The reason for this strange inconsistency is that in most societies the wealth of the powerful depends on the poverty of the weak. In many societies slavery and the gross underpayment of workers underpins the wealth of large landowners and of investors in business. In Australia the subsidies given to wealthy investors are supported by the refusal to raise benefits to the people most disadvantaged in the community.

As these injustices become more patent, they are again concealed by making false distinctions between the worthy and the unworthy poor. The most disadvantaged are blamed for their condition. In Victorian England, those who received benefits were forced to wear distinctive dress. In Australia they are stigmatised by cashless cards and compulsory testing for drugs. These stratagems enable governments to describe the support given to people who are poor as a gift and not as a duty. By calling this support a gift, our government can justify not maintaining the support they provide at a level that allows people to live above the poverty line.

The existence of poverty in our society is a measure of the value we place on human beings and their lives. If we value people by their charm, their ability to build easy relationships, by their success in work and making money, then people who are poor may be seen to fail on all counts. They are seen to have no value. However, if we are to retain hope when we live in poverty and to stay with people who are impoverished, we must value them highly for their simple humanity. They are our brothers and sisters and worthy of respect.

Respect is the bedrock of our engagement with vulnerable young people at Jesuit Social Services. We work with young people who often have known little respect in their lives and who might see themselves as worthless. Respect can break the cycle of lost hope.

The parable of the Good Samaritan encourages us to reflect on how we respond to people who call on our compassion. It shames those who passed by the man who had been mugged. It continues to shame us today when we overlook the needs of people who clearly need help.

The key steps to valuing people who are poor are, first, to change our personal attitude to poverty and to people who experience it. We must see poverty as an unnecessary affliction to be removed, not as the fault of those who suffer from it nor as an unavoidable feature of our world.

To change our personal attitudes, of course, means coming to know people, hanging in with them, feeling for them in what they suffer, and helping to educate those who are afraid or contemptuous of them.

Poverty is a sign that we have failed our brothers and sisters to whom we are responsible for sharing the common good.