Artful Dodgers Studios is a place of possibility 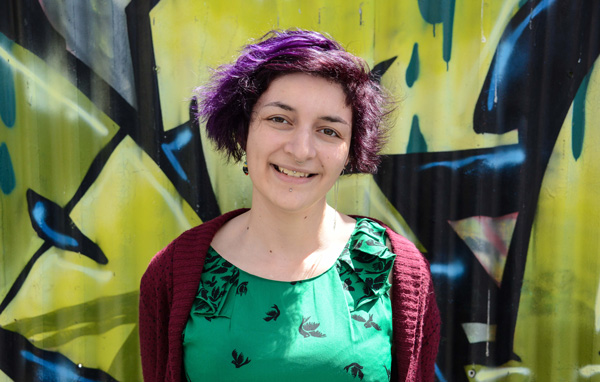 Kris says Artful Dodgers Studios is “a place to you can go to be yourself”. Image credit: Fiona Basile

When Kris came to Artful Dodgers Studios in 2014, she saw a hive of activity and opportunity.

“It was a very welcoming, colourful space. It seemed like there was always something bubbling in the background – somewhere anything was possible.”

The Studios engage at-risk young people through art and music projects, with the aim of increasing their artistic and employability skills, social connection and self-esteem.

“When I first walked in I thought, ‘Okay, I have to be here to make art, I have to be really driven.’ But it’s not about that. It’s a place you can go to be yourself,” says Kris.

Choice and flexibility for young artists

The Studios’ flexible model lets participants choose where, what, when and how they engage – a choice that’s integral to young people’s sense of ownership and empowerment.

Kris says this flexibility allowed her to accomplish things in other areas of her life, too.

“It’s about the arts, but if there’s anything else going on, you’re open to talk about it and try to work through it. It’s really free-form. When I’ve been in a rough patch, I’ve been able to just go in and they’re there to talk to.”

Kris says attending a spectrum of practice workshop at the Studios was “a really big milestone”, one which led her to design Christmas cards for Jesuit Social Services.

“It gave me an opportunity to make collage and have it displayed in the city, which was amazing. It’s also given me further work, for which I’ll be getting paid.”

Healthy relationships within a creative community

Key to Artful Dodgers Studios’ success is the ability of staff to develop trust and model positive, healthy relationships. This includes helping participants negotiate social interactions outside the studios.

“I feel a bit reserved going out to places by myself. Staff go to a lot of art events – like theatre, the Gertrude Street Projection Festival, and art gallery hops – and I would have been intimidated to go by myself. It’s really nice to have people to go with.”

Kris says working at the Studios has increased her confidence to cope with other things in her life.

“I’ve moved house a lot, and changed TAFE courses and friend groups a lot and [Artful Dodgers] has been a constant through all of that. It’s been great to know I have something to rely on. It’s definitely a backbone.”