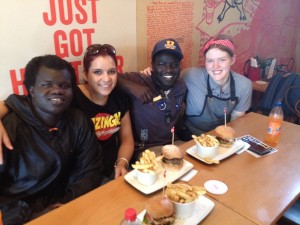 The innovative work of Jesuit Social Services gets invaluable community support from far and wide, which now extends to leading hamburger chain Grill’d.

Grill’d recently became supporters of our Artful Dodgers Studios when patrons at the Richmond restaurant voted Jesuit Social Services as the organisation most deserving of support.

Manager of Richmond Grill’d, Alex Wyllie said of the store’s recent Local Matters initiative “we love to give back to the community.”

“We actually get a stack of requests for support from different groups and organisations. So we could respond to these and share the love and lend a hand, we created Local Matters.”

“We like to sponsor organisation that fulfil a unique role. The programs of Jesuit Social Services certainly do that, so we are happy to do what we can to support them.”